Search for meaning in crazy world

BETWEEN THE lines
CHRISTOPHER BANTICK

PHIL Brown is a Brisbane-based poet, journalist and comic writer.

His first book, Travels with my Angst, was a collection of travel reminiscences where things went wrong and, at times, right.

His second book, Any Guru Will Do, is a very funny take on religious experimentation.

The book is a treat not only for those with a certain level of cynicism about devotees to any particular faith and belief systems generally even those with deep religious convictions may see some foibles in what they believe.

Brown is not a sceptic. This goes some way to explaining his search for meaning.
"Hitting middle age I'm just 50 is the time you have something to say about life," Brown said.

His path to enlightenment has been a journey with regular byways of hilarity and straight-out crazy things happening to him all in the name of making sense of life.

Brown said his personal experiences may be meaningful to others.
"When I began thinking about the book, I came to the view that my experience was likely to be reflected in others. I think a lot of readers would have had some contact with gurus or perhaps an awareness of Catholicism, not to mention the new happy clappy churches."

Besides the recounting of his scrapes with the religiously obsessive, there is a serious subtext to the book.
"I am wary of others bearing the truth," he said of gurus. "I wonder about fanatics who are described as passionate.
"I think that any form of extremity in a civil society is worrying. Radical Christians are now running boot camps."

There are some very funny moments in the book, not least when Brown, who describes himself at the time as a "depressed young poet", happens to meet Jeff, a born-again Christian.

We soon realise that never the twain shall meet on this one. The chapter, "Clap if You Love Jesus", will have more than a few Christian zealots shifting uncomfortably in their seats.

Then there is the achingly funny chapter "The Future, Now". Brown goes to Darren the soothsayer. But when he has his aura checked by Margaret, things really get celestial.

Brown said he was aware of something larger than himself. He said his own search had led him to an awareness of life's deeper purposes.
"I think wanting to know the meaning of life is a deep human question. It is the `why' question that makes people pause.
"You try to imagine eternity in a sky full of stars at night.
"I don't think Intelligent Design theory should be on a school syllabus, but I can understand people having empathy with the idea.
"This is the sense that there is a creative force behind creation. Everyone has a view on this. I think it is a natural, human thing to do. We can't explain away our emotions or spiritual awareness."

Even though the book will make readers laugh, it is worth remembering that every crackpot idea has its devotees. Brown goes further.
"Any kind of extremism is a kind of psychosis.

When I was young, I went along to big evangelical church meetings. I couldn't quite get with the message and I felt abandoned.
"A lot of this kind of thing is emotionally based. I think the Hillsong Church is an emotional movement where the rational is not heightened at all."

With, if anything, more cults and quasireligious movements burgeoning than when Brown was young, was there a time when he felt like laughing at the lunacy of some of the things he was being told during the course of his research for the book?
"I think I was angry when I realised that people were trying to rip me off and my wallet wasconsiderably lighter.
"Still, at the time, I was going through some serious searching.
"Even so, something always pulled me back from the brink. It was something in me that said, 'No thanks, this is wrong'."

Reviews - Any Guru Will Do: 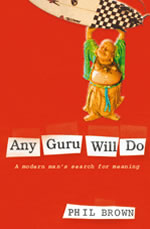 Brisbane author Phil Brown shares his search for enlightenment
"I wonder about fanatics who are described as passionate.
I think any form of extremity in
a civil society is worrying.
Radical Christians are now running boot camps"