For a cool change, Hobart offers a feast of culinary and artistic delights - Qweekend, The Courier-Mail, September 7 - 8, 2019

It was a shameful secret I had kept for years. As the Arts Editor of The Courier-Mail how could I tell people that I had never been to Hobart's Museum of Old and New Art better known as Mona?

Occasionally I have been forced to confess it but now I am relieved to say that I have finally been. It was the number one item on a recent wintry visit to Tasmania's compact capital. Last time I was in Tassie, Mona was being built which just goes to show how long since I was last there.

Our recent mission was to spend a week in this charming harbour city soaking up the cultural life, with Mona as the star attraction. The impresario Leo Schofield had suggested Sullivans Cove Apartments as a good place to stay and we had a gorgeous two-bedroom pad overlooking the harbour and with a view of impressive Mt Wellington, which was well and truly snow-capped by the time we left.

Winter in Hobart is culturally rich particularly when the edgy Dark Mofo festival is in full swing in mid June. But I wanted to dodge the Dark Mofo crowds so our trip came just after it but we were still in time for another wintry attraction, the annual Festival of Voices.

Determined to experience a performance in Australia's oldest continually operating theatre, Hobart's Theatre Royal, we were thrilled to find the renowned a capella group The Idea of North performing there midweek, so we went along and soaked up the historic ambience.

The Theatre Royal is on Campbell St near the waterfront and has been going since 1837. It has been restored and is looking quite gorgeous. It's now part of a $100 million cultural complex that will include the University of Tasmania Conservatorium of Music and new venues. That will all be completed by next winter and the Theatre Royal will be the heart and soul of what will be known as The Hedberg Centre for Creative Industries and Performing Arts, with a nod to the adjacent historic Hedberg Brothers Garage.

Theatre Royal is one of Hobart's cultural icons and another is the Tasmanian Museum and Art Gallery nearby, another must when you are soaking up the culture of Hobart.

This is an excellent institution (and like everything in Hobart, it's compact) and my favourite exhibit is the permanent Islands to Ice which is about Antarctica and our connections to it, appropriate since that frozen continent is pretty well the next stop south. The icebreaker Aurora Australis, regularly chartered by the Australian Antarctic Division for research cruises in Antarctic waters and to support Australian bases in Antarctica, is docked nearby. There's an amazing video at the museum filmed from the bridge of that ship as it ploughs through mountainous seas of the Southern Ocean.

I also loved the exhibit about the thylacine or Tasmanian tiger, a subject that fascinates me.

I know it's supposed to be extinct but I'm one of those who feel that it may still be out there, which is probably just wishful thinking. Across the road is the excellent Mawson's Huts Replica Museum, another must see. Our cultural tour also included Fullers Bookshop in the city centre, everyone's favourite these past 90 years or so. It has  a great cafe and regular book events and is part of the cultural fabric of the city.

The Hobart Book Shop at Salamanca Square is also excellent and there are some great art and craft shops around this harbourfront precinct.

Part of the cultural experience of Hobart is also the food and we did make a point of going to as many eateries as we could. Our favourite two are Rockwall Bar + Grill at Salamanca Place and Room for A Pony at funky North Hobart.

Our favourite cafe in Hobart is Jackman & McRoss at Battery Point just beyond Salamanca Place, a great place for a historic walk.

But of course the mother of all cultural experiences in Hobart is Mona, and the best way to get there is by ferry from the Brooke St Pier on the waterfront. It's a lovely way to approach this extraordinary art museum and architectural treasure that sits within the Moorilla winery on the Berriedale Peninsula.

The vision of its founder, the eccentric millionaire David Walsh, has transformed perceptions of Hobart and made Mona a must-see worldwide. It took me years to get there but when I finally arrived I must say I was as impressed with the building as with the art.

It was suggested that I might find it a bit claustrophobic since it is largely underground, but I was fine with that.

As much as I appreciated the edgier artworks, the one that bowled me over was the monumental Sidney Nolan masterpiece Snake featuring 1620 panels.

It has its own gallery and is a staggering piece. Even David Walsh admits that "without Snake, Mona wouldn't have legs", which is confusing since snakes don't have legs but never mind.

Snake is, to my mind, the crowning glory.

We spent most of the day mooching around Mona which has several eateries. We lunched in the impressive Faro in the new Pharos wing where executive chef Vince Trim's menu includes feral pig eyes encased in ice balls which are on request when available. Needless to say I didn't ask after them.

This restaurant is in a soaring space with views out across the water and it features interactive art by the acclaimed American light artist James Turrell, the bloke responsible for the night lighting of our own Gallery of Modern Art (GOMA).

Having now been to Mona I can say that it really is as extraordinary as everyone says it is. And now I don't have to feel ashamed any more.

The writer was a guest of Tourism Tasmania 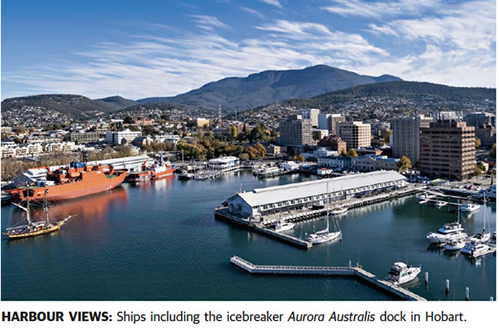