You don’t have to be an art lover to appreciate the impressive works that line the walls of this new contemporary hotel - Qweekend, The Courier-Mail, June 15-16, 2019

Sharing a hotel room with people you have never met before sounds a bit weird. But at The Fantauzzo, it's actually quite nice. This latest Art Series Hotel is filled with the photorealist portraits of the acclaimed Australian artist Vincent Fantauzzo, the hotel's namesake artist. Art Series Hotels are all styled on the work of Australian artists including John Olsen, Charles Blackman, Adam Cullen and others. Here in Brisbane we also have The Johnson, in Spring Hill, styled on the art of Michael Johnson.

It's a terrific idea and as an art lover I love staying in a hotel dedicated to art.

But did we really want to spend a weekend in a room with chef Matt Moran? Actually, yes, we did. I had brushed past Moran at the hotel's star-studded opening night party and had simply said to him, "Oh, the portrait itself come to life". He seemed amused.

A few days later we checked in for a family stay at The Fantauzzo and there he was again, on our walls. There was also a lovely photo of Moran and Fantauzzo who seemed to be very comfortable together.

That's part of Fantauzzo's genius, I think. His portraits are warm and engaging, and special because he seems to forge bonds with his subjects including Guy Pearce, Julia Gillard, Moran and a host of other celebrities and some lesser-known folks. (Wonderful animal paintings, too).

Having these works all around the hotel gives it a special feel. The most moving are of the late Heath Ledger and these are a bit heartbreaking considering his tragic death in 2008. Ledger's parents were at the hotel's opening party, which was nice and it shows how personally connected Fantauzzo is. People just love his portraits, which is why he has been awarded the Archibald People's Choice award more times than any other artist. His wife, actor Asher Keddie, is another of his subjects. She can be seen in the foyer and elsewhere, and helped him on this project.

The idea of having a hotel full of portraits sounds a bit much but it works and part of the reason it does is that design firm SJB worked to create a counterpoint, a contrasting backdrop to the work through dark tones and muted finishes that challenge the traditional white gallery space. The design also combines raw concrete finishes with black glass and tiles to create strong accents.

This 166-room hotel is the jewel in the crown of the Howard Smith Wharves project and it's easily the funkiest hotel in Australia.

Staying there is a great idea even if you live in Brisbane because it gives you time to really explore this exciting new precinct. The location under the Story Bridge is stunning and unique, and access to the river is a real attraction. After breakfast we went for walk by the water and mooched around being tourists in our own town.

Dinner and breakfast was at The Fantauzzo's bright and cheery eatery Polpetta, which also handles room service. The restaurant was busy and the staff were friendly. As a teetotaller I was pleased to find mocktails on the drinks menu - the Espresso Martini was terrific.

South African-born Shaun Fields is the general manager of this $100 million property and he seems pretty relaxed in the role despite the pressure of running a new hotel in a city full of new hotels. The Fantauzzo is now part of the Accor group and Fields was at their Melbourne property Peppers Docklands before coming to Brisbane. He seems to gravitate to maritime precincts.

This is the eighth Art Series Hotel and we have stayed in a couple of the others in Melbourne - The Olsen, in South Yarra, and The Blackman on St Kilda Rd not far from the city. Each property has a different feel and features a different artist.

The Fantauzzo has seven original artworks and 500 giclee prints throughout the hotel and guests can take complimentary art tours, watch in-room art channels and enjoy the art books in each room to saturate themselves in the arty ambience.

I was lucky enough to meet the artist and he's an incredibly warm person and that is reflected in his art. His wife (when I caught up with them she was helping him carry a large artwork across the foyer) says the couple wanted to create "a real feast for the eyes and the senses" and they have done just that.

The hotel itself is a contemporary artwork hugging the cliffs with some rooms having views of the exposed rock face, which is a natural sculpture with tumbling greenery.

The staff is young and engaged, there's a bar and pool and though it's in the Howard Smith Wharves precinct, which can get a bit busy, it is surprisingly private. 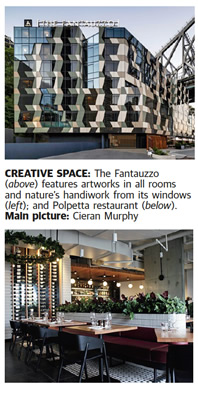