The work of the late, great Gil Jamieson will be celebrated in a new regional art gallery

You've heard of GOMA and MONA but what about the MMOA? I'm talking about the Monto Museum of Art. You didn't know there was such a thing, did you? But there is now ... or there will be soon, thanks to Matthew Jamieson and friends. Jamieson is the son of the late great Gil Jamieson, an acclaimed Queensland figurative expressionist artist who was better known in the southern capitals than in his own state.

Jamieson, who died in 1992, happened to be a close friend of mine. In the year I spent living in Monto, in 1979, I inhabited a farm house not far from his property. I was a fan of his work immediately, have written extensively about him over the years and I'm happy to be doing so again. Particularly since I heard the news that Matthew is spearheading this project as a permanent tribute to his father in his hometown in the North Burnett region.

Monto already has a public art trail that includes some decorated silos and it is an area that has produced artistic talent including Patrick Hockey and Gordon Bennett. The actor Michael Caton of The Castle fame is also from Monto, by the way.

Jamieson made a name for himself in Brisbane and then Adelaide, Melbourne and Sydney before he went back to base himself in Monto. He travelled widely, painting the landscape in the great outdoors and he was also a great chronicler of the people of the bush. He has always been a bit neglected in Queensland but he is in the QAGOMA collection where there is also a work by Fred Williams entitled Gil Jamieson painting at Lysterfield 1965, which is a tribute to an artistic friendship.

"It's in the context of truth and story telling and his clear connection to First Nations Peoples that Gil's legacy moved us to invest in supporting Matthew and his family to have Gil's work realised for their value to us all and to honour Gil's contribution," he says.

Wiradyuri does mention that Jamieson was at times "a difficult man". He was certainly pretty wild and didn"t suffer fools gladly.

The museum will be housed in former retail space in the main street of Monto, Newton St. MMOA will feature the family collection of almost 900 oil paintings and other works on paper on permanent loan and the museum will also partner with other galleries including Birrunga Gallery.

It will also feature one of Jamieson's greatest works - a 21-metre painting, Jay Creek, which was completed on location in the desert near the MacDonnell Ranges in 1973. Matthew Jamieson says MMOA will also "provide a unique insight into the history and sense of place of Monto in rural Australia".

"Through the appreciation of the works of Gil Jamieson and other Australian artists MMOA will bring together diverse sectors of the Australian community and will explore both the comfortable and uncomfortable narratives of Australian history," he says.

MMOA will comprise four large gallery spaces and will be a must-see cultural tourist destination for visitors to Central Queensland. 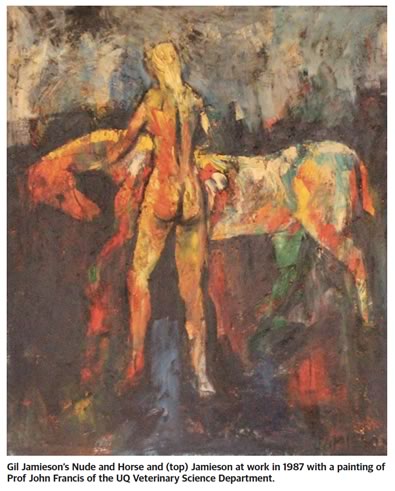