We arrived in our room in Whistler, in Canada's British Columbia, to find a nice card from the hotel's public relations lady. Friendly people those Canadians

It read ... "Dear Phil, welcome to Whistler where the beer flows like wine ... where beautiful women instinctively flock like the salmon of Capistrano."

For a moment I wondered what the hell she was on about and then I twigged! She had borrowed a classic line from one of my favourite movies, Dumb and Dumber, although the quote, from Lloyd Christmas (Jim Carrey) is actually about Aspen, also a ski village. When I read the card it made me laugh out loud. The reason she had quoted that movie was that she had read on my website that I'm a fan of that movie. Clever huh?

It's good to laugh out loud. There hasn't been that much to laugh out loud about lately though, has there? Which is why we need a few chuckles. So what tickles your funny bone? Well for me it's still Seinfeld, which I watch every day. True Story. Or Curb Your Enthusiasm, which is delightfully outrageous.

I have highbrow tastes in some areas but when it comes to comedy I don't mind admitting I'm pretty basic. Has to do with my upbringing I guess. I was raised on The Three Stooges for a start.

I remember my mum coming home one day to find my father, my brother and me sitting on the couch watching Three Stooges and pausing now and then to poke each other in the eyes. She just shook her head. Of course the physical comedy of The Three Stooges is not fashionable nowadays.

I also grew up on The Goon Show and Monty Python and can, rather annoyingly, recall long passages from both. Cleese was a favourite from Monty Python and if I really want a good laugh nowadays I watch Fawlty Towers, which is still repeated endlessly on Foxtel, thank God. It's still hilarious and a good dose of Fawlty Towers is very good for your health. For a few good belly laughs I also like Austin Powers movies which are still hilarious. I happened across Austin Powers in Goldmember the other night and I couldn't stop laughing.

Dr Evil is my favourite character and one of the most brilliant pieces of comic writing as far as I am concerned is the biographical monologue he delivers in the first Austin Powers film. "The details of my life are quite inconsequential," he says. "Very well, where do I begin? My father was a relentlessly self-improving boulangerie owner from Belgium with low-grade narcolepsy and a penchant for buggery. My mother was a 15-year-old French prostitute named Chloe with webbed feet. My father would womanise, he would drink. He would make outrageous claims like he invented the question mark. Sometimes he would accuse chestnuts of being lazy. The sort of general malaise that only the genius possess and the insane lament. My childhood was typical. Summers in Rangoon, luge lessons." And so it goes. I'm doubling up with laughter even now.

Reader's Digest suggests laughter is the best medicine and I agree. I hope in this age of political correctness we don't censor ourselves so much that no-one can say anything funny anymore. Not sure if that other character from the Austin Powers movies, Fat Bastard, would be approved by studios now but thank God he exists. Talk about laugh. 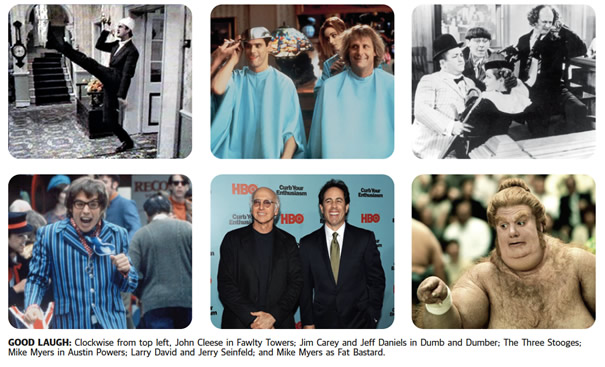