The cinema and theatre environment is really entrapment. It’s dark, you’re comfortable, no one is watching, and ... I’m out like a light.

I read an article recently about how good sleep is for you. Just as well really, because I've been doing a lot of it lately.

In fact as I write this, I can hardly keep my eyes open.

This is a bit of a change for me. When I was a bachelor boy, I was a terrible insomniac and you would often find me watching telly in the wee small hours, or tapping out poems on my old Remington, a cigarette burning between my lips.

I used to get to sleep around 2am or 3am. This meant I would sleep late; sometimes very late.

As a young cadet journo in Rocky, I recall being in bed fast asleep one morning when the phone rang. It was about 10am. It was the chief of staff calling to ask if I could make the supreme effort of coming into the office because there was work to be done.

I explained that I hadn't got to sleep until 3am, but he seemed unimpressed. Those years of insomnia were quite frustrating, but I have a lot of poems to show for the experience.

Slowly though, as I have settled into becoming a suburban dad with a regular life and a steady job, I have begun to sleep more and more.

This is a good thing because apparently we all need to get more sleep, for our health. So I really shouldn't feel too bad when I nod off at the cinema or theatre.

When I attended the opening night of David Williamson's fabulous new play, Nearer the Gods, at Queensland Theatre's spanking new Bille Brown Theatre, the first thing I noticed was how comfortable the seats were.

"I could have a good old kip in these," I quipped as I settled in - and I wasn't joking.

Just in case David Williamson is reading this, I should point out that I did not fall asleep during that play, but I can't promise I won't at some time in the future. When I do, my wife will nudge me awake, because even though she can't see me, she can sense when I have nodded off, no matter how subtle I think I'm being.

The cinema and theatre environment is really entrapment. I mean it's dark, you're comfortable, no one is watching and ... I'm out like a light.

I usually try to hold off turning my reading lamp out until about 11pm, but that has been getting earlier and earlier. I used to get through 20 pages of my book after turning the telly off, now I get through 10, or maybe just five, before I lapse into a semi-coma.

The other night my wife and I were both so tired, we switched off the light and went to sleep at 9.30pm. That was embarrassing.

On the weekend I could easily turn into a character from a sitcom - the dad snoring on the couch with the newspaper over his head. 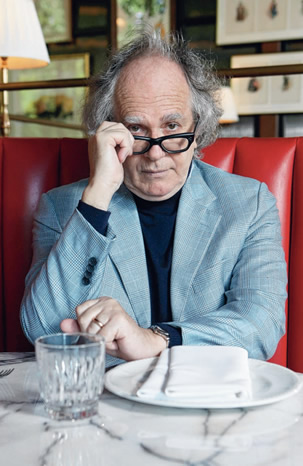