If you’re no good at relaxing or filling in time, why not write a book about it?

Author Robert Dessaix is not very good at leisure, so he has written a book to help himself. And others. The Pleasures of Leisure is a charming, meandering conversation around the subject and is vintage Dessaix. He's a writer who evokes the essayists of the 19th century and his new book is a kind of sequel to his last, What Days Are For, in which he mused on the meaning of life in his signature witty, sardonic fashion.

In his new book he does the same with the subject of leisure, a subject that needs exploring in this busy age. "Paradoxically, the richer we get, the harder we work and the less time we have to do what we want," he writes in a preamble to the book, asking: "What's gone wrong? We row frantically like galley slaves towards retirement and then, having arrived, and freed from the lash, we find that instead of all the time in the world, we're staring into infinite nothingness. "This arrest of habit," Janet Frame once cruelly wrote, 'often coincides with a permanent arrest of the heart'."

This is all particularly pertinent considering the fact that so many people will soon have time on their hands in retirement. "You'll have this huge block of time in which you're not dead but you won't quite know what to do," Dessaix says. "Some people will be left with that awful feeling of futility."

Dessaix, who lives in Hobart with his partner, fellow writer Peter Timms, suggests people embrace the coming leisure glut and start working on it now by giving themselves permission to, well, loaf if they want to. "Leisure is an end in itself and that's all right," Dessaix says. "Just go with it. I'm saying this as someone who is not very good at leisure. Peter is much better at it, and I think that if you're not good at something you should write a book about it. And so we can all discover something together."

In The Pleasures of Leisure, Dessaix considers the matter in his usual elegant style with plenty of digression, literary references and memoir-like passages, often glimpses of him travelling abroad and musing in exotic places. Some of his pondering is done in India with the Himalayas in view, with the author doing a good impersonation of a character from a novel by W. Somerset Maugham. He puts his talent for digression down to his love of the work of 19th century Russian writer Nikolai Gogol. (Dessaix once taught Russian language and literature at the Australian National University and the University of NSW.) "I first read Gogol as a teenager, he says. "He is the master of literary digression. Tolstoy is in control and I admire him too, the way one admires the headmaster. But Gogol has that talent for digression."

His tone is literary, humorously imperious at times with copious and varied references that display his talents as a dilettante. One minute he'll be referencing Bertrand Russell, the next it's Buddhism or the art of David Hockney.

But Dessaix knows exactly where's he's going even if he gets distracted along the way. To get there he engages himself, and his readers, in a long, languid conversation in a book that is divided into three main sections: Loafing, Nesting and Play.

And he ties it all up in the last chapter, A Final Word: "Without leisure - without what Amy Lowell calls the 'quiet, teeming vigour' of chosen idleness, without deeprooted nesting and fecund play - we're left with a life of servitude. That's not civilisation. Who wants that?"

The Pleasures of Leisure by Robert Dessaix, Knopf, $30;
Dessaix talks about the book at Avid Reader Bookshop, Boundary St, West End, from 6-8pm, May 16. Tickets $7.50; avidreader.com.au 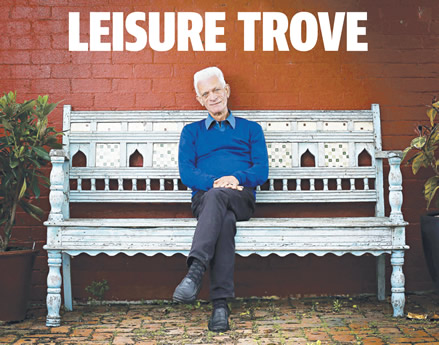 Robert Dessaix at his home in Hobart. Picture: Richard Jupe