A LITTLE BIT EACH WAY

Donald Horne was the man who defined Australia with a memorable phrase that was widely misunderstood. His opening sentence for a series of essays on the nation began with the unforgettable "Australia is a lucky country, run by second-rate people who share its luck".

Horne's essays became the best-selling book The Lucky Country, published in 1964. Horne, who died in 2005, became famous on the strength of it. A champion of Australian culture but no elitist, a conservative who was also liberal with his views and a republican at heart, he was the sort of balanced individual we need more of today as the culture wars continue to rage and extremist conservatives attempt to hijack Australian politics.

For lovers of the work of Horne or for those who don't know his writing but want to find out the essence of his oeuvre, his son Nick Horne has edited Donald Horne: Selected Writings, a definitive selection of his father's writing. Horne, 52, who works as a taxi driver, was putting together a book about his famous dad when he was approached to edit this volume. It features excerpts from Horne's best-selling autobiography, The Education of Young Donald, and includes a chapter entitled Radical Conservative, which sums up his divergent social and political views and includes passages from The Lucky Country.

There's also fiction (Horne was passionate about his fiction, lesser known than his non-fiction) and writings about the arts and culture, and a chapter about later works including moving excerpts from his book Dying: A Memoir. The foreword is by a former student, Glyn Davis, now Vice- Chancellor of the University of Melbourne, who says that Horne was "a man who helped the nation understand itself". Davis points out that not enough has been written about Horne since his death. "Perhaps it is the daunting richness of primary material that has discouraged any detailed biography of Horne to date, and yielded only a modest list of secondary works touching on his life and writing," Davis writes.

Davis's piece is followed by a moving but objective introduction by Nick Horne, who writes that his father wanted to be remembered "as someone who gave people something to think about". "Being his son I had a unique insight and I wanted to use that," Horne says. "But I didn't want this book to be just flying the family banner without bringing some objectivity."

It's worth knowing more about Horne because he was a man of contradictions, which made him interesting. He was a conservative who was sometimes identified with the left, a cultural critic of a country that he loved, and a plain-talking egalitarian who embraced the arts. A journalist and editor (he edited The Bulletin magazine in the '60s and early '70s) for much of his career, Horne was also chairman of the Australia Council for six years from 1986.

His writing reveals a thinker who happily changed his mind on various issues, was a champion of a more pluralistic Australia, and an avowed republican. 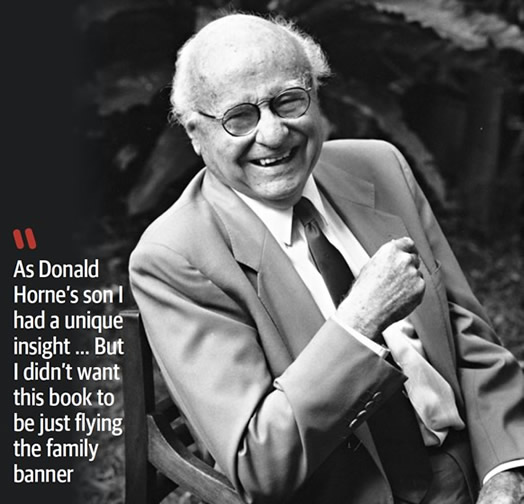