Since the days of empire, The Peninsula Hong Kong has been revered as the finest hotel east of Suez

Dinner at Gaddi's. To anyone who knows Hong Kong, that means something special. Gaddi's is The Peninsula Hong Kong's signature restaurant. Regarded as one of the world"s finest, it is anything but stuffy. On a recent visit we enjoyed the cuisine of French chef Xavier Boyer who arrived from Paris in February. (May I recommend his poached Boston Lobster? I think you'll like it.)

Gaddi's opened in 1953, named after former general manager Leo Gaddi who restored the hotel to its former glory in the years following World War II, during which it served as the rather elegant headquarters for the Japanese occupiers who renamed it the Toa Hotel. Since opening in 1928 The Pen, as it is known, has been Kowloon's social hub. High tea here is a major tourist attraction still and people queue daily for the chance to sip tea and nibble cucumber sandwiches in the gilt rococo splendour of the lobby.

For old Hong Kong hands (I count myself as one) The Pen is an almost spiritual touchstone as well as a byword for glamour. It has been a location for films including the 1974 Bond movie The Man With the Golden Gun and the cast, including Roger Moore, who was 007 back then, stayed at the hotel during filming.

My father's family first came to Hong Kong in the 1930s and like many others he treated The Pen's lobby as a cross between his office and his loungeroom. Some businessmen used to place brass nameplates on their tables.

I recall my dad coming home one day and recounting how he'd just had a drink in the lobby at The Pen with actor Steve McQueen. Other luminaries who've stayed here include Noel Coward, Marlon Brando, Muhammad Ali, Elizabeth Taylor and Princess Diana.

The lobby is still a great place to sit and watch the hotel's fleet of Rolls-Royces come and go. If you stay at The Pen you will be picked up at the airport by one of these luxurious green machines, unless money is no object and you opt to arrive by helicopter at the hotel's rooftop helipad.

When I was growing up in Hong Kong in the 1960s, The Pen was graciously lowrise and some worried that the 30-storey addition in 1994 might spoil it. Instead, it's multiplied the pleasure. We stayed in a deluxe harbour view suite on the 27th floor of that tower. Another major refurbishment in recent years has modernised rooms and you can now run your stay largely by tablet - just one touch for valet, in-room dining or to open and close the curtains - although you will mostly leave them open for the amazing harbour views.

The Peninsula Hong Kong's hotel chain has spread to Shanghai, Beijing, Paris, Beverly Hills and elsewhere, with more planned. It all started in the days when passengers from ocean liners disembarked on the docks of Kowloon and travellers who had begun their journey on the Trans- Siberian Railway finally made it to their last stop. The book Great, Grand & Famous Hotels recounts that hotel founder Sir Elly Kadoorie had a burning desire to create "the finest hotel east of Suez". So he did.

The Peninsula Hong Kong - the hotel’s fleet of Rolls-Royces. 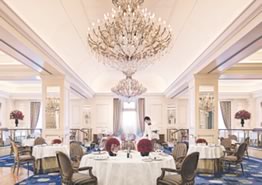