Now that's a better class of elevator music. QT has it programmed so the music suits the number of people in the lift. One person, you get a lonely song; three or four, a party tune. Cute, right? And it's just one of the funky features of this boutique hotel that's an eclectic mix of design, art, luxury and style with a touch of quirk.

All this in the heart of Sydney. I was there for a couple of nights on business, you understand. It was my first time at this hotel and it was a fun experience from the moment I was accosted ... er, welcomed by the usherettes at the front entrance. Why usherettes? Because the hotel is a melange of two historic buildings, one of which is the State Theatre, which dates back to 1929 and is still running next door. The other, the section on the corner of Market and George streets, is the old Gowings retail building, which is of a similar era.

Inside the State Theatre are original artworks and fixtures by William Dobell and Charles Wheeler, two of Australia's most significant artists. With the facade returned to its former glory - including the retro cachet of the distinctive neon Gowings sign outside - the interior retains its old world appeal with thoughtful integration of new technology, distinctive art mediums and cutting-edge emerging art. Bespoke furniture, a strong use of colour (bold black and white, Yves Klein blue, magenta and citron throughout), and eclectic and quirky artefacts complete the individualism of the place.

The 200 rooms are all beautifully appointed and the general vibe of the hotel is, well, vibrant is one word you could use. If you want sedate, look elsewhere, because this joint is jumping.

Gowings Bar & Grill is an attraction (the bar was going off the night I dined there), with executive chef Paul Easson in charge. Parlour Lane Roasters downstairs is a European-style cafe by day and a wine bar in the evenings when there's a show on at the State Theatre next door. It's a happening place and was partner hotel for the recent Sydney Festival, which was appropriate considering its arty flavour. And you get tailored music in the lift.

The writer was a guest of Destination NSW 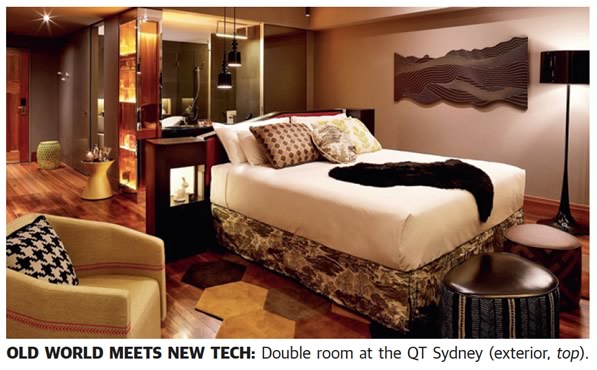