ZOO WITH A VIEW

On the ferry to Sydney's Taronga Zoo, I'm thinking Paul Simon was right. On the 1968 Simon & Garfunkel album Bookends there's a cute song entitled At The Zoo. It's sung by Simon and starts ... "Someone told me it's all happening at the zoo / I do believe it, I do believe it's true".

I've been listening to it again lately. I love one verse in particular: "The monkeys stand for honesty, giraffes are insincere / And the elephants are kindly but they're dumb / Orangutans are sceptical of changes in their cages / And the zookeeper is very fond of rum".

The song is about the New York Zoo but it could apply equally to Taronga Zoo, although I can't say for certain if any of the zookeepers there drink rum.

But it certainly is all happening at the zoo, this year more than ever. This month Taronga Zoo is marking its 100th anniversary (October 7 was the official birthday) and the centenary is being celebrated all year.

Taronga is a popular and much-loved national icon, and you get a sense of that as you wait for the ferry at Circular Quay on Sydney Harbour. Excited families rush on board and there's a palpable sense of anticipation on the short but scenic trip. When you disembark, the excitement continues as you catch a Sky Safari cable-car up to the zoo entrance.

It had been a few years since our last visit and decades since my first. I remember as a young child living in Sydney being awestruck by a gorilla called King Kong at Taronga Zoo. It's the sort of childhood memory that stays with you. That gorilla scared the hell out of me.

Everyone has memories of this special place, says Taronga Zoo CEO Cameron Kerr. "One of the things we've been doing this year is asking people to share those memories," Kerr explains. "It's a scheme called 'I Grew Up With Taronga' and people all over the country have been submitting photos and helping us build up a digital record."

Kerr presides over Taronga and its expansive sister location, Taronga Western Plains Zoo at Dubbo in the central west of NSW, a 300ha property that includes the popular Zoofari Lodge. But Taronga Zoo in Sydney is the mothership, located in its extraordinarily beautiful bush setting on 21ha of waterfront property at Mosman on Sydney's Lower North Shore.

Taronga is derived from an Aboriginal word from the Cammeraygal people who lived in and around the water-ways of what is now Mosman and North Sydney. Kerr says the word is thought to mean "harbour views, water views or shoulder of land". It's unclear which, but all apply.

It's an amazing spot, with one of the world's best views. As you wander around the zoo there are tantalising vistas featuring the harbour, the Sydney Harbour Bridge and the Opera House.

"When my peers from other zoos around the world come here, it only takes around 10 minutes before they turn green with envy," Kerr says. "They say, 'how on Earth did you get a zoo in a location like this?' We're very fortunate, particularly to be able to present Australian wildlife in a bush setting with this backdrop. It's very powerful, and international visitors love seeing kangaroos and echidnas here with this archetypal view."

When the zoo was established on its present site in 1916, the northern side of Sydney Harbour wasn't an attractive proposition. The first public zoo in NSW had officially opened in Sydney in 1884 on a site known as Billy Goat Swamp in Moore Park, in the city's inner east. When the zoo was relocated across the harbour, some of the animals were marched down Macquarie Street before being put on pontoons and ferried to the Taronga site. That must have been quite a vision, and it was celebrated last weekend with a 100th birthday parade featuring giant animal light sculptures. The zoo is also celebrating its centenary by inviting visitors to spend their birthday with the animals for just $1 entry fee on the day.

The problem is a day is not enough to see everything the zoo has to offer - more than 300 species and more than 4000 animals from around the world, with Australian wildlife a big drawcard. On our visit we opted for Taronga's Wild Australia Experience, a keeper-guided tour that includes a behind-the-scenes component. It began with a visit to the koala enclosure in the company of tourists from Belgium and the US, among other countries. It was lovely to see the international visitors' eyes light up when they came face-to-face with the koalas and kangaroos basking in the sun nearby.

Behind the scenes we also encountered some endangered greater bilbies, and perhaps the biggest treat of this tour is getting up close to the hand-raised and very tiny feathertail glider. This animal, the smallest mammal at the zoo, graced our now-defunct one cent coin and holding one of them in the palm of your hand is a special experience.

Doing this tour reminded us of our unique wildlife and the need to conserve it. Conservation is a big part of what the zoo does and to mark Taronga's 100th birthday it has launched a centenary program dedicating the next 100 years to the conservation of 10 critical species, five from Australia - the marine turtle, greater bilby, regent honeyeater, corroboree frog and platypus - and five that are on the brink of extinction in Sumatra: the sun bear, pangolin, Sumatran tiger, Sumatran rhino and Asian elephant.

You will see most of these at Taronga Zoo. One of the attractions for families is the daily shows - the seal show and the avian show, which stars the huge Andean condor with a wingspan that extends to 3.3m in some birds.

The chimpanzee show is impromptu and happens all day. We kept coming back to the chimps and never tired of their antics, their sense of fun and sometimes humanoid qualities. Watching them, if you're not occasionally reminded of a friend or relative, I'd be very surprised.

The Western Lowland gorillas from Africa are pretty impressive too, and brought back memories of King Kong sending a shiver down my spine.

Walking around the zoo is a treat with those regular glimpses of the harbour, the sort of visions that would inspire a quick watercolour en plein air if you were that way inclined.

We think the giraffes have the best views, for obvious reasons. And they don't even have to crane their necks. 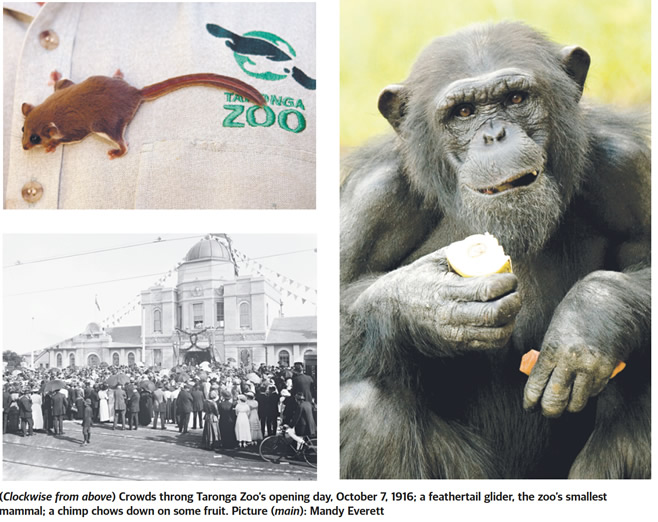 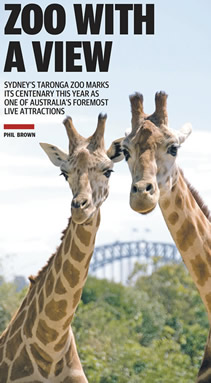 Taronga Zoo is open daily
including Christmas Day
and is located at
Bradley’s Head, Mosman.

Admission fees are $26 for children (under 4s free)
and $46 for adults
with cheaper rates online.

(Taronga Zoo is a non-profit organisation and all fees go towards wildlife conservation.)

Taronga is just 12 minutes
from Circular Quay by ferry.