Secret’s out on creative capital

Whatever your interest – food, history, art or politics – vote with your feet and discover more on a tailormade tour of Canberra.

Arriving in Canberra by bus, I disembarked and felt like kissing the ground. Yes, you read right - I did arrive by bus, even though I was supposed to have flown. But our flight from Brisbane was turned back due to a bushfire and after several hours in the air we ended up in Sydney.

The helpful folks from Visit Canberra got me on a Murrays bus and after a 3.5-hour journey by road I finally arrived in the national capital. Phew.

Canberra is a wonderful city (yes, it's true folks) and has nice hotels, great restaurants, good shopping (the Canberra Centre downtown is a revelation) and all our favourite national institutions including Parliament House which, despite the shenanigans that go on inside at times, is impressive.

I stayed in what is known as the Parliamentary Triangle at the Burbury Hotel, part of a DOMA Hotels precinct that includes Hotel Realm where I stayed on a previous visit. The Burbury is also home to another Canberra institution, Chairman & Yip, which relocated here a few years ago. Since 1992 it has become one of Canberra's most highly regarded restaurants. Head chef William Suen has long combined the best of both the Oriental (with a Cantonese theme) and Occidental culinary flavours, to create delicate and classic dishes. The decor is muted old Shanghai style. Dinner there was my reward after an epic journey.

The Burbury is close to what is always my first stop - the National Gallery of Australia with the much loved National Portrait Gallery just next door.

The main attraction at the NGA was the Matisse & Picasso exhibition which is on until April 13.

On permanent display however is Blue Poles, the famous painting by Jackson Pollock that is one of our major destination artworks, thanks to Gough Whitlam.

Getting around is easy. Being a planned city, the avenues are wide, the traffic is light and everything is relatively nearby.

Where to start though? I wasn't sure but now I am. Start by booking a tour with Canberra Secrets, run by Marg Wade, also the author of the book Canberra Secrets: Your Key to the Capital ... and it really is.

Rather than wandering confused, it's great to have a guide and Marg offers small group tours or bespoke personalised ones catering to your interests. If you are a history nut, she has the tour for you, if you are a foodie, same. And so on.

We begin our tour by strolling the R G Menzies Walk, named of course after one of our most illustrious leaders. His walk goes along the shore of Lake Burley Griffin which is appropriate since he inaugurated the lake in 1964.

The lake is named after the American architect Walter Burley Griffin who won the competition to design the capital in 1912. Old Parliament House opened in 1927 but Lake Burley Griffin came much later with construction beginning in 1960.

Walk along its shoreline and along the way you will meet Sir Robert Menzies in the form of a wonderful bronze sculpture by Melbourne sculptor Peter Corlett.

Lots of Canberrans and their pooches pass us by as we admire the statue. The lake is very popular with locals.

Afterwards we pop into the National Capital Exhibition which is housed in a nearby visitor centre at Regatta Point overlooking the lake.

This exhibition traces the history of Canberra with some fascinating film footage of the early days and a strong acknowledgment of indigenous history. Maybe we should know all this stuff but I had to admit, I didn't, so I was grateful to have a short, informative history lesson.

Then Marg whisked me to Parliament House and, as an almost throwaway line, as we were passing the historic Hotel Kurrajong Canberra she mentioned that prime minister Ben Chifley had a heart attack there on June 13, 1951, was carted off to hospital but died en route. Apparently he always stayed at that hotel and they reckon he still does, in a ghostly fashion.

"You mean it's haunted?" I ask. Marg nods and I'm pleased because I love a good ghost story.

OK, Parliament House is no secret but there are nuances that you will miss without a guide and places elsewhere in Canberra you may not find by yourself.

Which is why it's wonderful to see Canberra through the eyes of someone who knows and loves it.

The writer was a guest of the National Gallery of Australia and VisitCanberra.
Burbury Hotel, 1 Burbury Close, Barton, Canberra, burburyhotel.com.au; visitcanberra.com.au 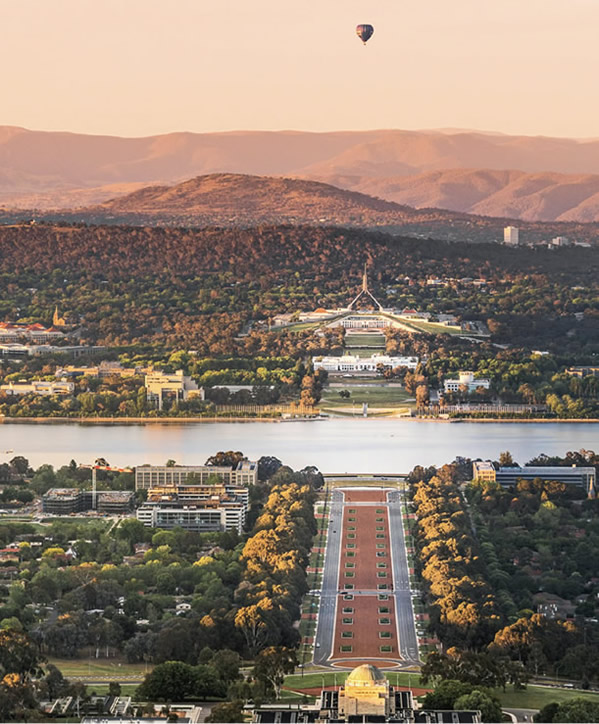 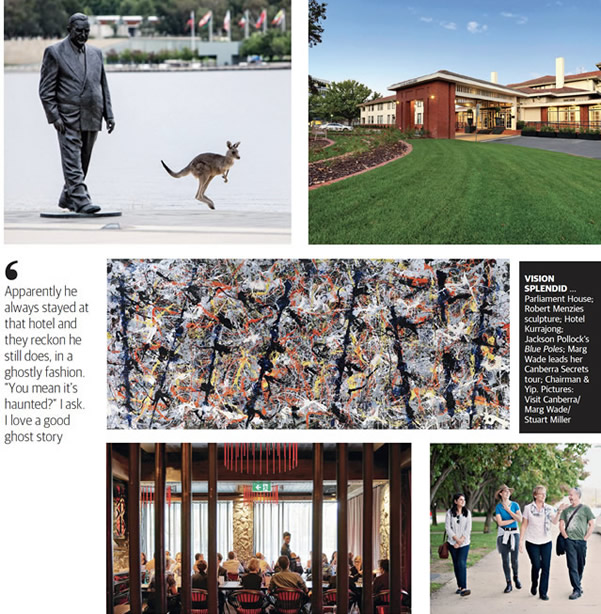