Ignoring the touts in Tsim Sha Tsui isn't easy, but after a few days you will master the art of staring straight ahead like a zombie. The last two blocks of bustling Nathan Rd - The Golden Mile - are particularly busy with these blokes in small groups thrusting flyers at you and asking: "Copy watch? Make suit? Come and see?"

I tried to explain to one guy that I already had a tailor, but that was a mistake. Once you start a discussion, it's hard to disengage. This is a minor irritant and pretty amusing really (my son thought so) and it is all part of the colourful street life in this bustling district.

Tsim Sha Tsui, also known as TST, is at the stubby point of Kowloon Peninsula in Hong Kong. At the very end is the famous Star Ferry and along the foreshore of TST is a promenade where you can take in the stunning harbour views and watch the Symphony of Lights laser show each night at 8pm.

We were staying at the Sheraton Hong Kong Hotel & Towers which has fabulous views, particularly from the Sky Bar on the upper floors. This hotel has a perfect position for anyone who loves TST. I do, and I feel I could walk around the place blindfolded, although that might not be such a good idea nowadays.

I spent seven years of my childhood in Hong Kong and as a kid spent a lot of time wandering the streets of TST. One of my best mates lived in a penthouse on the corner of Nathan Rd and Cameron Rd and that was our base camp.

It was a racy area in those days. The Vietnam War was raging and the troops poured into Kowloon on rest and recreation leave. Girlie bars sprung up to cater to them and I remember once being in a rickshaw from the Star Ferry to my mate's house and getting into a race with another rickshaw full of American sailors.

There are no rickshaws now, but it is still familiar in the nicest possible way.

It has always been a hub for tourists and the crowning glory of this area is The Peninsula Hotel, the grand old dame of Hong Kong hotels. It was a social hub for us in the 1960s and it still is. In fact, when we are staying in Kowloon, wherever we are staying, we usually begin our day with coffee at "The Pen". It is famous for its high tea, but I like it in the mornings when it is The South China Morning Post, watching the Rolls-Royces come and go ... heaven.

Tsim Sha Tsui is a little city within itself really. The Hong Kong Tourism Board describes it as "a giant world bazaar where Hong Kong's glittering harbour is met by an alternate sea of stalls, shops, markets and malls".

The shopping is awesome and includes Harbour City which is enormous. Go in there in the morning and you may not emerge until late afternoon ... if you can find your way out.

There's a lovely ritzy new shopping centre called 1881 Heritage on nearby Salisbury Rd, a little heritage precinct that has been preserved in the name of mammon. The new iSQUARE mall is plush and has some great shopping and a brilliant Marks & Spencer food hall at the rear of the centre which opens on to Lock Rd. This is one of my favourite little streets in TST - it has some excellent cafes and our favourite Indian restaurant, Branto Pure Vegetarian Food Club, a hidden gem up a flight of dank stairs. You ring a little buzzer on the street to go up.

Lock Rd is also home to the excellent Swindon Book Co. Ltd, a great shop with a superb section of books about Hong Kong. I haunted this store as a kid and I haunt it still whenever I am in Honkers.

Back across the road at iSQUARE, ride the lift to the top and dine at one of Kowloon's hottest eateries - Nanhai No 1, where we had lunch, a mixture of dim sum and a la carte delicacies. There are some brilliant restaurants in TST, including Aqua and Hutong, both at 1 Peking Rd which is not far away, and the Felix and Gaddi's restaurants at The Peninsula.

But for cheap eating, the many small Chinese cafes in the side streets offer some fine food. There are good and cheap curry joints in the famous Chungking Mansions building too. Chungking Mansions has been described as "the ghetto at the centre of the world".

It's a shabby old building on Nathan Rd full of budget guesthouses, an anachronism on one of the world's most famous shopping streets. The maze of arcades on the lower floors is a treasure trove where you get an awful lot of bang for your buck. Mind you, there are other places in TST where your dollars go further, including Granville Rd for cheap clothes.

TST bustles all day and all night. If it all gets a bit too much you can take refuge in the quiet environs of Kowloon Park, a leafy escape right in the heart of this intense district. Or you can repair to your room at The Sheraton, as we did most afternoons to regroup, watching the ships and ferries coming and going and preparing for our next sortie into Hong Kong's most exciting precinct.

THE WRITER and his family were guests at the Sheraton Hong Kong Hotel & Towers, 20 Nathan Rd, Kowloon, Hong Kong. sheraton.com/hongkong 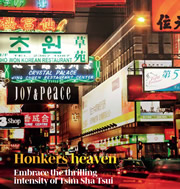