Visit an extensive exhibition in the Victorian capital and stay at a stunning and rather arty new hotel.

Now let me see if I remember how this works. You book a flight, go to the airport, get on the plane and you're off. It sounds simple but after not flying interstate for more than a year it felt weird. Weird but good. Exciting, actually, and the fact I was going to test drive the new W Melbourne and see a major exhibition of Australian Impressionism at the National Gallery of Victoria (NGV) increased the anticipation.

This was just before the recent lockdown but we lived in Melbourne for three years in the early 1990s and I kind of love the place. And the weather. No, really.

I arrived in Melbourne on a sunny Sunday to find it quite warm so I was a bit miffed. I like Melbourne cool and dreary but didn't have to wait long because the next day it was. Terrific! After lunch with a friend at Hawthorne I caught a taxi to the W Melbourne. The driver had no idea where it was - not his fault, it's that new, having only opened in February. This arty property was the perfect place to stay on my visit to see She-Oak and Sunlight: Australian Impressionism at the Ian Potter Centre: NGV Australia at Fed Square.

The W Melbourne is only the second W (a Marriott brand), in Australia. Of course we have the first in Brisbane and it's pretty cool. Melbourne's, on Flinders Lane, describes itself as a "luxury lifestyle hotel" and I would have to agree. It's luxurious but it's anything but stuffy. This 294-room hotel brings a cool vibe to the $1.25bn Collins Arch mixed-use precinct in a burgeoning section of Flinders Lane.

Australian architecture and interior design firm Hachem brings innovation and brand storytelling to life through their evocative approach to this hotel, drawing on the city's diverse and contrasting character with vignettes of Melbourne's streetscapes expressed in the artistic touches. Those artistic touches begin in the lobby with a vast lenticular art installation (a painting method that gives extra depth and dimension) by local painter and digital artist Rus Kitchin which immerses us in a colourful canopy of Australian flora and fauna. There are murals and other arty touches throughout. One of the most amazing pieces in the hotel is the Wet Deck Apple up in the pool and bar area. This large stand-alone piece by artist Bruno, celebrates what was once a forbidden fruit. The graffiti covering it reflects the street art below.

Melbourne is a foodie's paradise and W Melbourne has distinctive restaurants and bars and the all-day dining restaurant Lollo is under the culinary creative direction of celebrated chef Adam D'Sylva. The hotel's cocktail bar Curious is a cool subterranean hideaway place and the signature Japanese restaurant Warabi is another attraction although it wasn't yet open when I was there. Damn.

There are so many little touches that make this hotel special. Instead of calling separate numbers for in-room dining, housekeeping and so on there is just one button to press that says "Whatever/ Whenever". I love that.

And it's important for me that there was a 55-inch LED TV with lots and lots of channels including all major international news channels.

It's a brisk walk from here to The Ian Potter Centre: NGV Australia, a more intimate gallery than its big sister, the NGV International on St Kilda Rd nearby.

She-Oak and Sunlight: Australian Impressionism, which is on until August 22, features 270 artworks drawn from major public collections around Australia including the NGV's. Whenever I go to Melbourne I pop in here to see one of my favourite Australian paintings, Shearing the Rams by Tom Roberts.

It's an extensive exhibition and probably the most edifying I have seen on Australian Impressionism.

It features some of our finest paintings including the one that was my late mum's favourite ... the almost transcendental 1896 painting by Arthur Streeton, The purple noon's transparent might, a vision of the Hawkesbury River that has become a touchstone in Australian art.

Streeton's Fire's On, painted in 1891, is another favourite of mine and yes it is there too along with another classic, Still glides the stream and shall forever glide, also by Streeton.

The show is quite wide in its reach as it reveals the many forms of impressionism in Australia and it's wonderful to see more than 50 works from the landmark 1889, 9 by 5 Impressionism Exhibition which took its name from the dimensions of the cigar box lids upon which many of the works were painted. That exhibition had an almost spiritual place in Australian art history.

The gallery has cleverly juxtaposed some of the works with those of artists such as Monet and Whistler, drawn from the NGV Collection, to reveal the broader global context and explore synergies between the artists. If you love Australian art, this exhibition is a religious experience. Set aside at least an entire morning or afternoon to worship here or why not just spend the whole day? There's a great cafe, and a lovely gift shop and there are some exciting shows coming to the NGV and soon you will be able to see this show and then pop over to the NGV International to see the major exhibition French Impressionism, which has just opened. Then there's Goya: Drawings from the Prado Museum, which is due to open this weekend. So much to see in Melbourne that I am going back in a few weeks to take in the lot. Can't wait.

The writer was a guest of NGV Australia and Visit Victoria 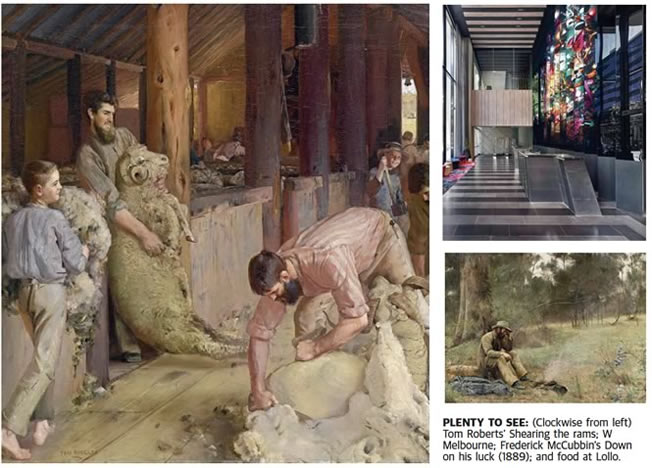