The capital of Kiwi culture 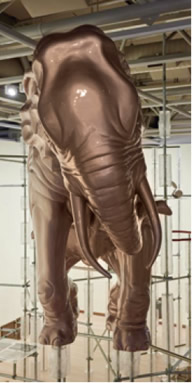 First let's talk about the elephant in the room. The Michael Parekowhai elephant. It's the first thing you'll notice when you visit Toi Art, the spectacular new $8.4 million art gallery at Te Papa, New Zealand's national museum in Wellington. Parekowhai's entrance installation, which includes a large, fibreglass painted pachyderm, is entitled Detour and it will seem familiar for a very good reason. Because Brisbane has one too. An elephant, that is. I'm talking about that massive public art work on the GOMA Cafe Bistro lawn, a large black upside down one called The World Turns. Parekowhai has a number of works in our collection and he's a favourite with GOMA-goers, so to be greeted by a major work of his in Wellington makes one feel at home.

There are other highlights, including the wonderful portrait wall in the Turangawaewae: Art and New Zealand section, which is a good introduction to the nations history for a newcomer such as me. I haven't been to New Zealand since I was a teenager, but now I'm a convert.

I felt immediately at home even before I saw the Parekowhai and I think I can safely say I love windy Wellington. Luckily, the wind abated as my Virgin flight was coming in. I understand some landings here are so hair-raising that passengers clap when the wheels touch down. It did get breezy during my four-day visit and I had a couple of bad hair days, but never mind.

I had heard Wellington was also a very cultural city and I can now report back that it's true. It's New Zealand's centre of government, the world's southernmost capital city and is described by some as "the coolest little capital" and the only one in the Roaring Forties latitudes. Hence the wind. It's picturesque, nestled on a harbour with hills beyond and, last year, Deutsche Bank rated it the best place to live in the world among 47 global cities. It's an important centre for the film and theatre industry and home of Sir Peter Jackson's The Lord of The Rings trilogy.

A visit here should always start at the much-loved Te Papa, which encapsulates the story of New Zealand culture and art. From here it's a short walk to the excellent City Gallery Wellington, which is, I was told, an excellent spot for lunch. The Nikau Cafe there makes a killer kedgeree, a dish I have always loved. The art is pretty good too.

My gallery crawl also included the The Dowse Art Museum at nearby Lower Hutt, another popular spot for art lovers. Adam Art Gallery at Victoria University is another must. In fact you could keep busy for a week doing just the galleries with stops in between at the cafes and restaurants. Cuba Street, downtown, is cafe society central on a breezy Saturday afternoon. It made me think of Fitzroy in inner Melbourne with a touch of Brisbane's West End thrown in.

Dining options are many and varied and I had excellent dinners at Charley Noble and at Hippopotamus Restaurant and Cocktail Bar, which offers French fare.

Before I forget, make sure you take a ride on the Wellington Cable Car, which takes you from the city centre up to the Wellington Botanic Garden on the hills behind. From here I could walk back to the Sofitel Wellington nearby.

Wellington is a compact city and everything is pretty near everything else. I love that. And I love this city.

The writer was a guest of WellingtonNZ.com and Sofitel Wellington

The
Wellington Cable
Car climbs to the
Botanic Garden