Le flâneur in the City of Light

Poring over a complex map of the Paris Metro with the helpful concierge at The Peninsula Paris, my eyes started to glaze over. I will never get the hang of this city, I thought. I was planning to see Paris above ground.... from a taxi, on this, my first time in the French capital. (A previous visit 22 years ago was thwarted by a visa stuff-up but the days when we needed a visa are thankfully long gone.) We'd arrived by Eurostar (a seamless transition) for five nights in the swanky 16th arrondissement, home to foreign embassies, museums (including Fondation Louis Vuitton) and Passy, where the city's wealthiest residents live. The Peninsula is on Avenue Kleber, a short stroll from the Arc de Triomphe and a brisk 20-minute walk from the Eiffel Tower.

We have friends in Paris who kind of turned their noses up at our temporary address. The 16th is for toffs, they explained. But on a short visit, why not treat yourself? My first hurdle, though, was to try to get a handle on the city and The Metro because, as we soon found out, taxis tend to get caught in traffic snarls. The Metro turned out to be surprisingly easy to navigate, and the map wasn't that hard once we figured it out. But, really, walking is the best way to see Paris, something my wife and son convinced me of, eventually, although it does get a bit chilly out on the streets of the city in early December.

On our first day we caught The Metro a few stops, then walked to the first attraction on our checklist - Hotel des Invalides, a complex of buildings in the 7th arrondissement containing museums and monuments relating to the military history of France. The highlight is Napoleon Bonaparte's tomb, which is simply amazing.

After that we went into flaneur mode, wandering through St Germain where we lunched at a lovely little bistro, then on to find the famous Shakespeare and Company Bookstore in the Latin Quarter, a shop once frequented by Ezra Pound, Ernest Hemingway, James Joyce and other literary luminaries. The original was in a different location but this is still a literary pilgrimage site, and we jostled inside with other pilgrims.

Notre-Dame de Paris, the famous cathedral, is nearby but a queue a mile long dissuaded us from visiting. There is a lot of queueing to be done in Paris, so be prepared for that when you arrive at places such as the Louvre Museum. We went to see the Mona Lisa, as you must, but you have to fight your way through the crowd to get a glimpse. There are other museums that may be less crowded, such as the Musee de l'Orangerie, an art gallery of Impressionist and Post-Impressionist paintings located in the west corner of the Tuileries Gardens, and the Musee Picasso in the Marais district is another you should put on your list.

We were lucky to have our own personal guide some of the time, our friend and Australian film writer Helen Barlow, who has lived in Paris for many years. She took us on a long walking tour past the Canal Saint-Martin and the Place de la Republique (where, appropriately, a protest was being held) and through several arrondissements. As I looked up the side streets I thought of Woody Allen's 2011 film Midnight in Paris in which a young American writer (Owen Wilson) time-travels back to 1920s Paris and earlier to meet all sorts of artistic greats, including Hemingway, who famously wrote: "If you are lucky enough to have lived in Paris as a young man, then wherever you go for the rest of your life, it stays with you, for Paris is a moveable feast." 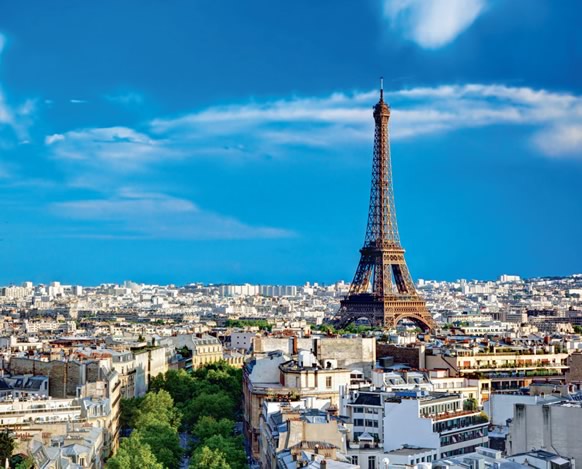 View to the Eiffel Tower from the Arc de Triomphe