I can honestly say that the earth moved for us staying at The Peninsula Tokyo. It was just 6.0 on the Richter scale - a mere tickle in Japanese terms. Nothing out of the ordinary, apparently. But it added spice to our visit and a state-of-the-art, luxury hotel was the best place to be.

That excitement aside, let me tell you that from the very solid 17th floor of The Peninsula Tokyo we had a right royal view of the Imperial Palace and its grounds. The Imperial Palace East Gardens are open to the public and we took a stroll there late one afternoon

This gorgeous hotel has prime position at the entrance of the Marunouchi and Ginza districts. Architect Kazukiyo Sat's vision was a hotel resembling a Japanese lantern and indeed it does. Often the Peninsula Hotel Group chooses heritage properties but this one was purposebuilt just over 10 years ago and it is a 24- storey modern design icon. In the guestrooms, interior designer Yukio Hashimoto has used rich, earth-toned colours, wood, lacquer, marble and stone to create an aesthetic "international in design, but Japanese by inspiration".

Peter, the signature restaurant on the 24th floor, has breathtaking 180-degree views of the Japanese capital and is an artwork in itself. It was designed by US and Canadian architecture and design team Yabu Pushelberg, and the bar features a forest of cherry blossom trees made of glass. The backdrop, as you dine, is an amazing video wall featuring animations of Tokyo and other capital cities. We dined on red snow crab cakes, Hokkaido scallops, Kobe beef and other delicacies. Let me tell you, the grilled wagyu menu will warm your heart. Unless you're vegetarian.

If you prop at the bar before dinner, you might try the hotel's signature Tokyo Joe cocktail, inspired by the 1949 Humphrey Bogart movie of the same name, the first Hollywood production filmed in post-war Japan.

The hotel has a range of dining options, including Hei Fung Terrace, offering authentic Cantonese fare (a nod to Hong Kong, where the group's mothership hotel is located). There's The Lobby, where high tea is served in true Peninsula tradition, while Kyoto Tsuruya on basement level one serves Japanese cuisine. Nearby is The Peninsula Boutique & Cafe and, if you have a sweet tooth, like me, this is a good spot for coffee and cake. There's direct access to Hibiya train station on this level, which is very handy indeed.

The hotel's location in general is terrific, particularly if, like us, you plan some Ginza shopping and eating. The service is, as usual, exemplary and if you want to know anything about going anywhere, see the concierge desk. I did, regularly, and staff seem to have a map for every excursion imaginable. 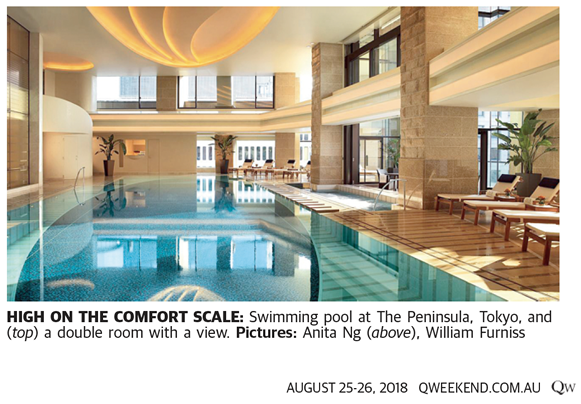