Shinjuku is about colour and movement in a city of lights, people and action - Qweekend, The Courier-Mail, September 22-23-2018

When it comes to real estate, it's all about position. As they say, position, position, position. Same goes for hotels and Ibis Tokyo Shinjuku's position, in the city's most vibrant precinct, is brilliant. You can catch the train from the airport directly there. It takes 75 minutes on the Narita Express and you will egress at the world's busiest railway station. Having been there, I can completely believe that.

It's just a short walk from the station to the hotel, which is compact, clean and comfy with the sort of welcoming staff we've come to expect at Accor hotels. And because the brand is French there are plenty of friendly "bonjours", always a nice touch. This hotel was the first Ibis in Japan. It has 205 rooms, with wi-fi and all the usual amenities. The rather jaunty Cafe Rendezvous on the lobby level serves a decent breakfast. Outside, the wonders of Shinjuku are all just a stroll away. It's like a microcosm of Japan and has everything from the crazy - the famous Robot Restaurant - to the sacred, the equally famous Meiji Shrine.

The shopping in Shinjuku is amazing. The main branch of my favourite bookshop, Kinokuniya, is here, with its seven floors of books. Unfortunately most are in Japanese but there is a European section in the arcade on the ground level. Isetan Shinjuku department store is a must and the food hall downstairs is utterly amazing. Buy a bento box lunch and go up to the roof garden to eat it.

Shinjuku's skyscraper district is home to many of Tokyo's tallest buildings, including the twin towers of the Metropolitan Government Office, which has observation decks open to the public. There's also Kabukicho, Japan's largest and wildest red-light district (at night Shinjuku is a neon-lit wonderland), but it's very non-threatening and you will walk through there without any dramas. In the midst of all this you can escape into the tranquil beauty of Shinjuku Gyo-en, an imperial park and garden that has a lovely traditional tea house. Here, we escaped into Japan's past and drank green tea in ceremonial fashion. All this is close at hand when you stay at Ibis Tokyo Shinjuku. 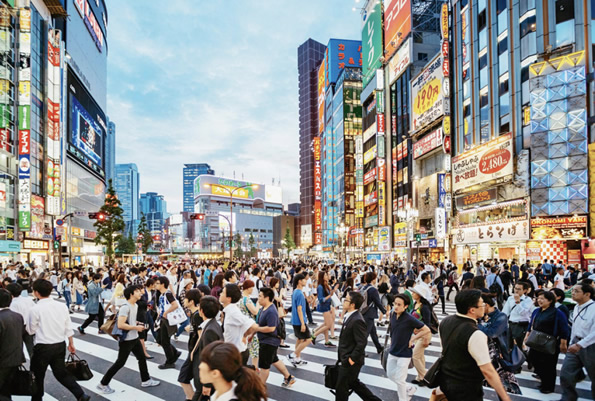