If Paris is a movable feast, what does that make Singapore?

The compact island republic of Singapore is certainly a feast for the senses. Looking for superb, cheap Asian cuisine? Check. Want to escape into some tropical rainforest? Check. Want to shop in a floating Luis Vuitton store? Check.

Tradition and hi-tech modernity co-exist in this fascinating city state that is so much more than a stopover destination. This year, we made our second visit in as many years.

We chose the same digs this time around - the Novotel Singapore Clarke Quay (pictured below), which is central and, importantly, has a great pool. It also has a secret - a Japanese supermarket in the basement of the shopping mall next door complete with sushi and noodle bars. You can actually walk to some of the main attractions or catch the MRT but frankly, Singapore's taxis are cheap and often the best way to go. Forget a brief stopover - give yourselves a week.

Here are 10 of my favourites:

This huge, beautiful five-storey southern Chinese-style Buddhist temple's main drawcard is the left canine tooth of the Buddha, reputedly recovered form his funeral pyre in northern India. Or so they say. The main hall is lined with thousands of gold Buddhas and you can buy, by donation, a booklet on how to live your life by the Chinese zodiac. There is a shop where you can buy a CD featuring the abbot's latest chants and the temple is located on the edge of Chinatown. Try the food stalls in nearby Smith St.

At the other end of Chinatown is one of Singapores oldest Hindu temples. This one dates back to 1823, and a brightly coloured tower, added later, soars above the street front. We came upon this temple one night 20 years ago and have visited often. Inside, deities jostle for primacy and worshippers do their thing but tourists are also welcome.

You may not be allowed into the inner sanctum where the toffs stay but you can enjoy the eateries and bars and other attractions of this historic hotel. Start with a pastry and coffee at the excellent Ah Teng's Bakery. For lunch go a curry at The Tiffin Room and one must have a drink in the Writers Bar. The hotel, opened in 1887, is "a symbol for all the fables of the exotic east" according to author W. Somerset Maugham, who stayed there. The most famous local tipple, the Singapore Sling, was invented here. The Raffles Hotel Museum is open daily between 10am and 7pm.

Two blocks west of Raffles, situated in a heritage building, SAM, as it is known, fuses historical charm with a strong contemporary feel. A highlight is the Wu Guangzhong gallery that features a rotating exhibition of art donated by the father of modern Chinese painting. The museum's genteel Dome Cafe is well worth a visit and just around the corner is a small extension, known as 8Q SAM, featuring edgy contemporary art and a fab gift shop.

It was never really going to work as a fort because the cannon could not reach the harbour from this distant hilly patch. Sir Stamford Raffles built his original residence here in 1822 before it was a fort. The fort was demolished in 1929, although a gothic gate remains. Military offices now house art organisations and the underground bunkers are now a World War II exhibit.

We discovered this museum on a recent visit. It is a journey into the heart of Straits Chinese culture. Check out the diorama displaying a traditional Peranakan (another word for Straits Chinese) home complete with video portraits of elders arguing about whether or not their descendants are leading culturally appropriate lives. The museum is on Armenian St just below Fort Canning Park.

Set in central Singapore away from the urban centre, there is much to see by day and at night. We have breakfasted with the orangutans, which is a treat. The Night Safari next door is awesome.

Just a 10-minute bumboat ride from Changi Village this small island remains a rural, unkempt expanse of jungle full of lizards, birds and the occasional shrine - a land that time forgot. The little ferry requires 12 passengers before it leaves. On Ubin hire a bike and explore. Later, graze at Changi's hawker market.

This is a must when you are visiting Singapore, although it is one of those place you want to visit in the evening rather than the heat of the day. Serangoon Rd and the incense scented lanes nearby may not really be India but it smells like India and tastes like India and that is worth a lot.

GARDENS BY THE BAY:

Wow. Singapore's latest attraction is like something out of a sci-fi movie featuring expansive gardens and two vast domes with their own environments
inside. 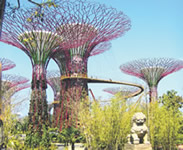 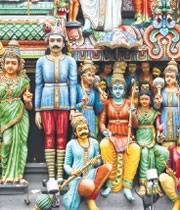 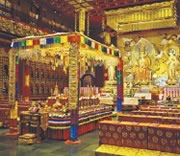