Ilike to know who has stayed in a hotel before me. So I was impressed by the roll call of celebrities who've rested their heads at the Sofitel Sydney Wentworth, which celebrated its 50th anniversary in 2016. In 1969, astronauts Neil Armstrong, Buzz Aldrin and Michael Collins spent three days there as part of a world tour. The Sultan of Brunei, the Aga Khan, Marlon Brando, Prince Frederik and Princess Mary - the list goes on.

It's a lovely hotel, with 436 luxury rooms, including 45 opulent suites. The Garden Court Restaurant, which blends local flavours with French gastronomy, is an elegant and relaxing space with an open kitchen that adds a bit of theatre. Another dining option is the 1960s-inspired Soiree at Wentworth, offering a chic setting with French-inspired, all-day a la carte dining, playful cocktails and Apero Chic (French Cocktail Hour), an extensive Champagne menu, weekly live music at the Piano Bar, and the Wentworth's renowned High Tea.

When it was completed in 1966 as the Wentworth, it was the first five-star hotel in Sydney. American architectural firm Skidmore, Owings & Merrill, in partnership with Sydney firm Laurie & Heath, developed a bold, semicircular design for the building, which is now heritage-listed. The horseshoe shape was to ensure rooms on Phillip St would not be too close to the road and would instead overlook a raised central garden courtyard. It was rebranded as a Sofitel in 2004 when French group Accor gave it a $50 million refurbishment, with more to come.

The Sofitel has become synonymous with the arts. We were in Sydney to see the musical Jersey Boys, which is coming to Brisbane in January. If you can't wait, you can pop down to Sydney and enjoy some of the hotel's Jersey Boys packages, including a meet-and-greet with the cast. Jersey Boys is on at the Capitol Theatre in Sydney until December 15.

The writer was a guest of the operators 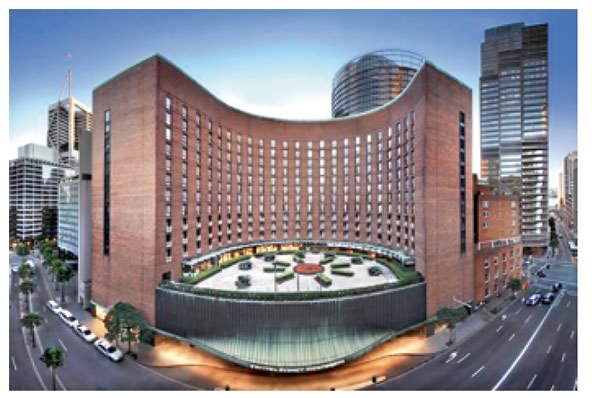