Phil Brown reports - WHERE TO STAY

It's the little things that make a difference at a hotel. One of the things I love about the Sofitel brand is the unpretentious use of French. In the lift the staff say, quite naturally, "bonjour" and in the evening it's "bonsoir". Being a French brand, this is totally appropriate and adds a touch of class. And the new Sofitel Sydney Darling Harbour is all class.

It had only been open a month when I stayed there recently and there was still a palpable buzz about the place. Chief operating officer of AccorHotels Pacific, Simon McGrath, points out that it is "the first new-build five-star hotel the city has seen in more than 15 years". It towers majestically above Darling Harbour with views across the city to Sydney Harbour.

Every Sofitel around the world is culturally linked with a city or region in France that shares similar attributes in terms of culture, landscape and design. Sofitel Sydney Darling Harbour is culturally linked with Marseilles, the epitome of waterside sophistication. The Sydney hotel is set in a vibrant maritime precinct with the ships of the Australian Maritime Museum moored nearby. I could see them far below me from the Club Millesime Lounge on the top level, 35 floors up. (Floors 28-34 are exclusive to guests staying in the Club Sofitel rooms and suites.)

The hotel, designed by awardwinning Sydney architects Francis- Jones Morehen Thorp, has 590 rooms, including 35 suites, all with floor-toceiling windows. Bathrooms feature luxurious tubs with views of the city. Dreamtime Australia Design and the A+ Design Group all collaborated to create the visually inspiring property, built by Lend Lease.

The glass exterior has "triangular accents" to represent sails, and a red ochre and blue exterior colour palette pays tribute to the indigenous clans of the Eora nation who lived and fished around Tumbalong, Darling Harbour.

I dined with a friend at the hotel's signature restaurant, the French-inspired rotisserie and grill, Atelier by Sofitel, onthe third floor, where executive chef Matt Coates doesn't skimp on servings. The restaurant is high-ceilinged and spacious, and adjacent is the rather gorgeous and equally ample champagne bar serving 20 different brands of bubbles, which is interesting but not of much use to a teetotaller such as me.

There's the Le Rivage Pool and Bar beside the 20m infinity pool on level four and a gym where you can work out with a view of the Sydney skyline. Service is at a premium and, as I said, those smatterings of Frenchness add to the atmosphere.

The hotel's proximity to the city means you can access much of it on foot. I was in Sydney to attend the Sydney International Art Series, which is on through summer along with Beautiful: The Carole King Musical (it's playing close to the hotel at the Sydney Lyric Theatre), and throughout January you have the Sydney Festival to keep you busy. There's nowhere better to be at this time of the year than near the harbour in Sydney. I have a feeling the Sofitel is going to be rather busy during the silly season. Glad I got in early.

The writer was a guest of the operators & Destination NSW; visit sydney.com for details of what's on in Sydney over the summer 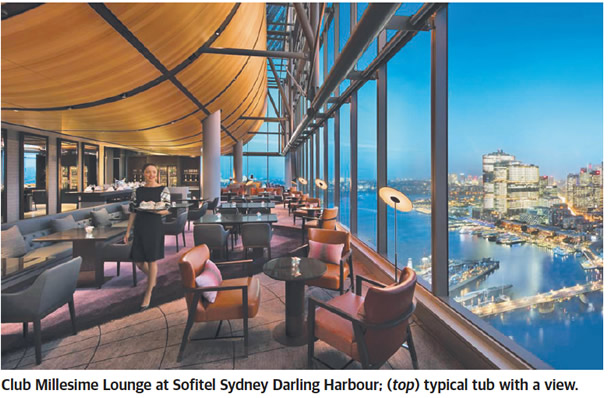