Eat your fill then chill on a Thai island idyll

I had an ulterior motive when I booked my wife in for a morning Thai cooking class in Old Phuket Town. The deal was that she would cook it and we would eat it. My son was in on the scam, too.

But first she was escorted to the local market to buy the produce and we went along. It was a riot of colour with exotic fruit and veggies, and tables groaning with aromatic spices.

As we browsed we munched on banana and taro cooked with sticky rice, wrapped in banana leaves. We washed that down with fresh coconut milk and then repaired to the cafe bar at the Blue Elephant Cooking School, sipping coffee while waiting for our lunch to be cooked. When it was ready, we feasted on a coconut prawn curry, fishcakes and other Thai delicacies. Day one on Phuket and things were going nicely.

We were staying at the Westin Siray Bay Resort & Spa Phuket. The general manager, Janet McNab, is a Brissie girl, so over a Thai banquet we filled her in with news from home.

I have the menu on my desk and I look at it longingly every few days ... king crab spring rolls, fragrant chicken and coconut soup with lime, stir-fried prawns with tamarind sauce, and mango fritters and ice cream for dessert.

There's a lot to like about Thai food - we all know that - but it's so much better when you're eating it in Thailand.

Our resort was on a cove in the southeast of Phuket, which is away from the more touristy areas of the island's east coast. The resort is sumptuous and set into a terraced hillside with views out across Siray Bay. You can see the local sea gypsy village from your hotel room and watch boats tracking across the water.

It's a gorgeous location with lovely pools, several restaurants and friendly Thai service. Buddhist culture engenders in locals a genuine desire to create an air of tranquillity. This is one of the reasons visitors love the place.

Another reason we appreciated our location was the proximity to Phuket Town, which is just 10 minutes by taxi. Phuket Town is the historical and administrative centre of Phuket, and traces it roots back centuries. Our guide book told us that "Phuket's back story reads like an old-school Robert Louis Stevenson adventure novel", with piracy, war and exotic travellers passing through. Phuket Town was founded in the 1st century BC by Indian merchants.

There were primitive tribes, sea gypsies and others, and much later the Portuguese, the French and then the British, followed by an influx of Chinese merchants.

Hence the jumble of colonial European and oriental architecture. The Chinese intermarried with the Thai people and a new fusion culture - known as Baba Nyonya or Peranakan - was born. The cuisine in many of the funky little cafes in Phuket Town reflects this marriage of people and cultures.

With its elegant if somewhat dilapidated mansions, narrow streets, Chinese shop houses with colourful shutters, curio shops and other treasures, it's a fascinating place to poke around.

The Blue Elephant Cooking School is set in a gorgeous old mansion, once the local governor's residence.

Further afield, we visited Phuket's Big Buddha on a hilltop overlooking the coast. Elephant camps dot the mountainside and mahouts offer elephant trekking for a reasonable price. My wife and son went off on one but I declined. The elephants were a bit taller than I'd expected.

No visit to Thailand is complete without some Buddhist temple-hopping. The many on Phuket include the crowning glory, Wat Chalong, with gorgeously ornate buildings, including a pagoda which is believed to enshrine a bone fragment of the Buddha.

Phuket has a smattering of Muslim fishing communities and some great little Muslim rotirestaurants where you can eat your fill for just a few dollars.

There is plenty to do further afield: take a ferry to Phi Phi Island or visit Phang Nga Bay, home of the famous James Bond Island.

But we just enjoyed poking around Phuket Town and repairing to the resort for lazy afternoons by the pool, sipping cocktails or, in my case, mocktails, and enjoying sunsets from our villa's rooftop. Now that's what I call living. 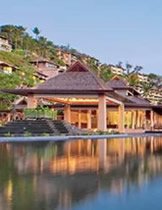 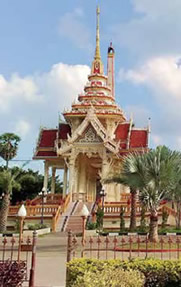