At tray chic gallery openings, a feed is always on the menu

As well as affording an opportunity to see art, any gallery opening is also an opportunity to stuff your face. I'm thinking about this because I have been invited to dinner at an art gallery next week. Some galleries around town are doing this now and it's a wonderful idea, although if I ran a gallery I'd be nervous about having food around.

What if, during an animated conversation, you flicked a bit of bolognese sauce on a painting? Quelle horreur!

It wouldn't make a lot of difference to some works, I suppose.

I have dined at several galleries and am looking forward to another free feed ... I hope that doesn't sound gauche. I have had some memorable nosh-ups at art exhibition openings over the years. In fact, I tend to rate exhibitions on the hors d'oeuvres served at the opening.

My son feels the same. I may set a bad example but he and I tend to hit the trays before we look at the art. I have sold him on attending various shows by telling him that I have heard the caterers are very good.

We went to a cocktail party at Jan Murphy Gallery a while back - an annual gathering of her artists, clients and some members of the Fourth Estate.

It was a wonderful evening and we arrived a little late, waving to people as we came in. But then I spotted a waiter with a tray of snacks and my son and I fell upon it with gusto.

Eventually, when we'd had our fill, we socialised and looked at some art. I thought we should.

I recall the first exhibition opening I ever attended as a callow young reporter in Rockhampton. Due to the fact that I had long hair and John Lennon glasses, they gave me the art round. I went to the opening of a show at The Gallery Up Top in Quay Street, Rocky, and took a couple of mates with me.

I was relatively well behaved but my friends virtually crash-tackled the first waiter they came across and emptied his tray, much to the horror of the gallery director. They also drank more than their fair share of bubbly.

But when you're a young bachelor on a low wage and cooking for yourself, you get your tucker where you can.

And why not? I mean, they schedule openings at dinner time and then serve up little portions of food that don't quite equate to a meal. Not unless you eat a lot of them, that is.

So it's my policy to wolf down as many canapes as I can at an opening so I don't have to worry about dinner.

The big exhibition openings at QAGOMA are best for this, of course, although sometimes the finger food is a tad dainty. I'm not at all opposed to a party pie, sausage roll or some devils on horseback, if you gallery folk could please keep that in mind. Thank you. 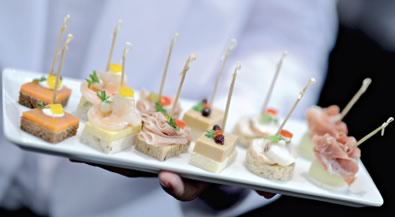