Camping, no … Glamping? Too right

It's safe to say I am not a happy camper. I come from a long line of unhappy campers. My father loathed camping, a hangover from a couple of years of camping in Australia and Borneo during World War II. He passed it on and I never camped as a kid. I did have a few forays in tents as a deranged teenage surfie but tha's it. Until recently.

On a mission to discover Longreach via The Spirit of the Outback train, my accommodation was organised for me.

"It's glamping accommodation," I was told. I baulked initially but "glamping" didn't sound so bad. I reckon even my dear old dad, long gone now, might even have given Mitchell Grass Retreat the nod. This accommodation consists of 15 luxury tents, each with its own ensuite, bathroom and airconditioning. There are European appliances, sumptuous bedding, beautiful linen and a private deck.

The location is terrific, on a Mitchell grass plain on the edge of Longreach. It took me around five minutes to drive from the airport to the retreat.

The idea to set up camp here came to David and Tanya Neal, my hosts, when they were experiencing a sundown on their property here. "As the golden red hues changed to deep blue they marvelled at the clarity of the outback sky at night," according to their website.

"The stars were shining so brightly from the inky darkness, a sky free from the light pollution found in towns and cities." On my first night I experienced this ... the peace and quiet ... and that sky.

Mitchell Grass Retreat is close to all the major attractions in town, including the amazing Qantas Founders Museum and the Thomson River, where sunset cruises are available. It’s also just an eight-minute drive to The Australian Stockman’s Hall of Fame and on the audio tour there I heard a reading of Banjo Paterson’s classic poem Clancy of the Overflow and for the first time it really made sense to me, especially when I heard the line referring to “the wond’rous glory of the everlasting stars” which a drover enjoyed night after night.

In fact you could just sit outside and look at the sky all night rather than watch television, which you may have to do since there is no television here. There is Wi-Fi though, I mean Mitchell Grass Retreat is not off the grid or anything. But David and Tanya do encourage you to have a “technology detox, nature-based break” and I think that’s fair enough.

You might like to just spend the evening sitting around a fire and each tent has a little outdoor camp fire set-up if you feel that way inclined. And there are marshmallows supplied in the fridge in your room for toasting. Even better.

The retreat is in the Mitchell grass bioregion. On the train to Longreach I heard an old timer pointing out to people in the dining car where the country changed to Mitchell grass plains. These grasslands represent 19 per cent of the state’s native pasture areas, some 33.8 million ha supporting approximately 15 per cent of the cattle herd and more than 40 per cent of the Merino sheep flock in Queensland. Thousands of people depend on employment generated by the production of beef, sheep meat and wool based on Mitchell grass country. It’s a resilient grass adaptable to dry conditions.

And it spreads as far as the eye can see at the Mitchell Grass Retreat. I only had a couple of nights there but I’d love to go back. Reclining in a five-star tent is my kind of camping. It’s also a good way to get back to nature and even though the tent is luxurious, the effect of being in a tent brings you closer to the elements.

One night of my stay was a little breezy and the wind gently buffeted the tent but it was more lulling than anything Paterson’s Clancy experienced. He wrote of “the murmur of the breezes” as one of the “pleasures that the townsfolk never know”.

Staying at the Mitchell Grass Retreat is one way of acquainting yourself with those pleasures. And it really brought Paterson’s poem alive for me. Mind you, the droving life might have been a bit tough. If only they’d had glamping back then. 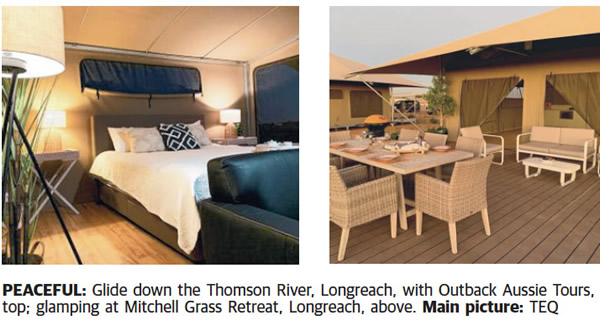