In the footsteps of convicts, between city and sea 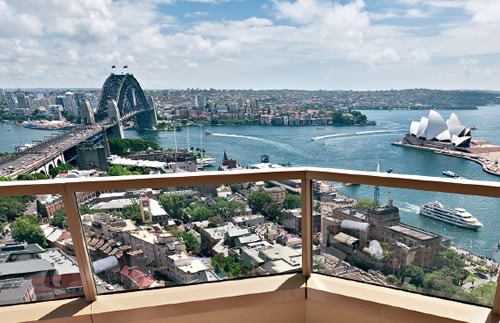 It started with the view.

And what a view. Samuel Johnson once quipped that when a man is tired of London, he is tired of life. Same goes for views of Sydney Harbour. From our apartment at Quay West Suites Sydney, in The Rocks precinct, we had the picture-postcard vista - Sydney Harbour Bridge, Sydney Opera House and, below us The Rocks and Circular Quay.

Being a history buff, this area was attractive and the proximity to Circular Quay a plus. And having a two-bedroom apartment with a kitchen and laundry is handy when you're staying for a week.

We spent the first hour or so sitting in the lounge room like stunned mullets, taking in that view before exploring The Rocks. Convicts who lived in the area from 1788 named it after rocky outcrops there. But its original inhabitants, the Cadigal people, named it Tallawoladah. Good to see that acknowledged on street signs.

It's a tourist area so there are organised walks if you want them and, even better, ghost tours. It's touristy but in a nice way, and remarkably intact.

It has a lively feel thanks to the mix of shops, cafes and restaurants. We had a favourite patisserie cafe (La Renaissance in Argyle St) and in the evenings we dined out on pub grub, Japanese food and at Appetito, a great little Italian restaurant in George St. We also ate at William Blue Dining, a training restaurant staffed by hospitality students.

The food was great and it's lovely to be served by youngsters who are so polite and enthusiastic.

One of the major attractions is the Museum of Contemporary Art Australia, just five minutes' walk from our digs on Circular Quay, which is an attraction in itself with people from all over the world coming and going.

Catching ferries to Taronga Zoo and Manly are also must-dos. Quay West Suites Sydney has a concierge, 24-hour reception, Harrington Restaurant & Bar and a handy lift down to Harrington St which saves walking up a steep-ish hill.

I forgot how exciting Sydney can be. The convicts might not have had such a great time staying in The Rocks precinct but it worked for us.