THE RESURRECTION OF SHYLOCK

He should have seen it coming. I mean, which play would you ask a Jewish Booker Prize winner to write a contemporary fictional version of? Which of Shakespeare's plays has one of the most famous Jewish characters in the literary canon?

The Merchant of Venice, of course, which receives a modern retelling in Jacobson's novel, Shylock is My Name.

For the Hogarth Shakespeare project, a series of modern takes on Shakespeare's works by authors such as Anne Tyler, Margaret Atwood and Jeanette Winterson, Jacobson had a wishlist that included many major Shakespeare plays.

"I wrote a list and the only play that wasn't on it was The Merchant of Venice," Jacobson says by phone from his home in London.

"It wasn't a play I thought about doing, although I can see that it may have been the obvious play they would want me to do," Jacobson says.

"I had wipe d it from my mind because the Jewish boys at my school were all embarrassed by this play about a Jewish moneylender who said things like, 'hath not a Jew eyes?", and that became a bit of a joke. When we felt someone was saying something anti-Jewish we'd wring our hands and say, 'hasn't a Jew eyes'?"

Luckily Jacobson, 73, who does not regard Shakespeare as anti-Semitic in creating the Shylock character, overcame his initial reluctance to tackle The Merchant of Venice and he has given it a brilliant modern twist.

In this provocative and profound interpretation, Shylock is juxtaposed against his present-day counterpart in the character of art dealer and conflicted father Simon Strulovich.

Jacobson presents Shylock as a man of incisive wit and passion, one who is concerned with things Jacobson is fond of exploring in his fiction: questions of identity, parenthood, anti-Semitism and revenge.

While Strulovich struggles to reconcile himself to his daughter Beatrice's betrayal of her family and heritage, as she is carried away by the excitement of Manchester high society, and into the arms of a footballer notorious for giving a Nazi salute on the field, Shylock alternates grief for his beloved wife with rage against his daughter's rejection of her Jewish up-bringing. Culminating in a shocking twist on Shylock's infamous demand for the pound of flesh, Jacobson manages to make this a modern tale that has a genuine spiritual kinship with its antecedent drama. Jacobson considers The Merchant of Venice to be "the most troubling of Shakespeare's plays for anyone, but, for an English novelist who happens to be Jewish, also the most challenging".

So how do you resurrect a character such as Shylock? For Jacobson it was a matter of just bringing him back, bodily, as Shylock, not as a modern cipher. "I didn't want to do him as a ghost," Jacobson says. "I just saw him in this graveyard and thought, why can't he just actually be there? So I just bloody well let him be there and he was marvellous to write."

When he and Strulovich are in conversation it's "just two Jewish men talking" and it's very entertaining and, at times, very funny, indeed.

Shylock's conflicted relationship with his daughter is reflected in Strulovich's. Jacobson says he wanted to write about fathers and daughters, even though he only has a son.

"But I have a sister and the battle between my father and my sister when she was a teenager is still very vivid to me," Jacobson says. "He was very hard on her and I watched that and it was upsetting at times, though they became close."

Jacobson says after his initial misgivings, once he had put flesh and bones back on to Shylock he was "off and running".

"I wrote it quickly then and I haven't enjoyed myself so much in a long time," Jacobson says.

He hopes the book will be received well in Australia because he loves the place.

He taught at the University of Sydney in the 1960s and has often pointed out that when some of Australia's brightest were heading to England, he went in the opposite direction.

That was the basis for his 2014 ABC-TV series Brilliant Creatures (which was just screened again). In it he traces the footsteps of comedian Barry Humphries, feminist Germaine Greer, author Clive James and art critic Robert Hughes, arguing these Australian giants didn't just join the cultural revolution in the '60s, they led it.

Jacobson, who won the Booker Prize in 2010 for The Finkler Question, has a long and illustrious career as a novelist and has also written non-fiction, including In the Land of Oz, a loving travelogue and memoir of his journey across Australia.

"Life really began for me there," Jacobson says.

He hopes to visit again but says at his age travel is getting harder and harder. Besides, he has work to do, trying to win another Booker Prize.

"It's a funny thing," Jacobson says. "When I won the Booker Prize I felt relief and thought, 'I don't have to care any more'. But then, before long, you want to win it again."

Perhaps Shylock can help him do just that? 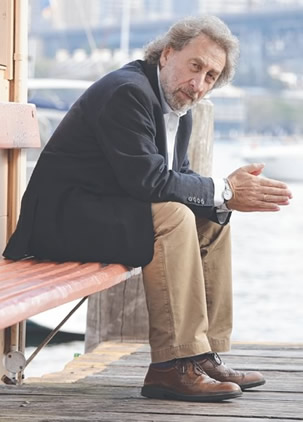