“I wanted to pay homage to [Jim] Morrison. His grave is one of the most popular”

The young couple strolling past had American accents so I thought I might ask them for directions. "Is this the way to Jim?" I said. They nodded and pointed. "Just over there," one of them replied, gesturing to the spot where the Doors frontman is buried.

Jim Morrison died in Paris on July 3, 1971, and is buried in Cimetiere du Pere- Lachaise, the largest cemetery in the city, an amazing place where some of the greatest names of literature and the arts have their resting place.

In English it's just Pere Lachaise Cemetery. It is one of the highlights of any visit to Paris and we nearly missed it. We had booked a classical music tour with Malcolm Livesey, an Englishman who lives in Paris. He's a friend of our pal Helen Barlow, an Australian who writes on film and also lives in the French capital.

Since some of the attractions on the classical music tour were closed, Livesey suggested we might do the cemetery tour instead and I leapt at the opportunity. As a fan of the Doors, I wanted to pay homage to Morrison. His grave is one of the most popular and it has been fenced off to protect it.

We visited on a cool afternoon in early December last year. Insipid sunlight broke through the clouds as we began to wander and the cemetery was bathed in an ethereal light, which seemed appropriate. In Adrian Sever's fascinating book Great Burial Places, the Australian author, historian and former diplomat writes that "Pere Lachaise has a peaceful and romantic air about it", and he's right. Strolling through the tomb and tree-lined avenues is a surprisingly lovely experience.

"So this must be the dead centre of town," I quipped as we walked. Boom boom. My son plays piano and wanted to see Chopin's grave, which Livesey led us to, and we paused and waited for some ghostly tinkling. Not a sausage.

So we wandered on, amazed at the depth of dead talent in what is really the cultural capital of Europe. French chanteuse Edith Piaf is buried here, as is the playwright Moliere. Marcel Proust is here, and so is Honore De Balzac. There's Bizet, the painter Seurat, Marcel Marceau, Gertrude Stein, Isadora Duncan, Maria Callas, all dead and buried or interred.

One of the most significant graves belongs to Irish writer Oscar Wilde. His tombstone is a wonderful sculpture by Sir Jacob Epstein. This grave was being loved to death, like Morrison's, so the authorities put up a glass shield to stop people writing messages on the stone. Now they write them on the glass.

The cemetery takes its name from Father (Pere) Francois de La Chaise d'Aix, the confessor to Louis XIV. It was opened in 1804 and each year receives more than 3.5 million visitors. It's a must-see if you are in Paris and the list of notables within is formidable. Nowhere else on the planet will you find such a gathering of talent. It's just a shame they're all dead. 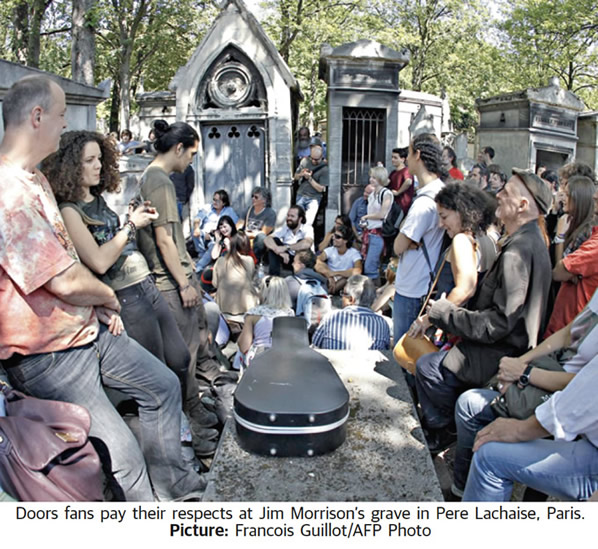