THE HEART OF KOWLOON

You won’t forget a stay at The Peninsula Hong Kong, where glamour and warmth accompany spectacular views.

It's still one of the best views in the world. From the window of our room at The Peninsula Hong Kong we sit watching the ferries track back and forth across the waters far below.

At night the fairyland of lights on Hong Kong Island adds magic.

The views are actually better from Kowloon but I would say that because I grew up on this side of the harbour, which some think is actually the wrong side. It's like the divide between Brisbane's north and south. People who live on Hong Kong Island, the seat of government and commerce in this Special Administrative Region of the People's Republic of China, sometimes jokingly ask if they need a passport to travel to Kowloon.

When The Peninsula Hong Kong was completed in 1928 some thought it a grand folly because Kowloon wasn't desirable in those days. Nowadays, surrounding Tsim Sha Tsui is a bustling tourist mecca crowned by the hotel known as "The Grande Dame of the Far East", the mother ship of a hotel group that is slowly spreading around the globe.

The point of building there had merit, even in 1928, and that is pointed out in the 2012 book Great, Grand & Famous Hotels: Facts, tales, secrets and scandals edited by Fritz Gubler. "Passengers arriving in Hong Kong by ocean liner disembarked onto the quays of Kowloon, and it was also the last stop for European travellers on the Trans- Siberian and Chinese railways."

Those were the days.

The Peninsula, known locally as "The Pen", made that side of the harbour seem more acceptable to many and the book describes it as "the heart of Kowloon". It certainly has been for my family, which arrived in Hong Kong in the late 1930s. My adventurous English grandfather, Lord Roberts Brown (he wasn't a Lord, that was just his name) ran a construction company in Hong Kong back then and was a regular at The Pen, as was my father in his youth. Later, in the 1960s when we lived in Hong Kong as a family, The Pen was the hub of our social life.

In my recent memoir, The Kowloon Kid, the hotel features strongly. In fact it begins and ends at The Pen and with tongue-incheek I describe it as "my spiritual home". And I'm only half joking. It's famous for its high tea and many people who have never stayed there have lingered in its opulent lobby enjoying that and watching the hotel's fleet of Rolls-Royces come and go.

Staying in-house is a treat though, one we have been lucky enough to experience on a number of occasions. And while it's certainly luxurious there's nothing stuffy about The Pen. The warmth of its founders, the philanthropic Kadoorie dynasty, seems to imbue the operation and The Pen is, as a result, always a friendly place.

That's evident in its other hotels around the world. We have been lucky enough to also stay at The Peninsula Bangkok (a gorgeous newish riverside property on the Chao Phraya), The Peninsula Tokyo (on the edge of the Ginza with views of the Imperial Palace) and at The Peninsula Paris, a sumptuous heritage property on Avenue Kleber near the Arc de Triomphe.

There are also properties in Shanghai and Beijing, Manila and across the USA (Beverly Hills, Chicago and New York) and it's beyond exciting (to me and many others) that next year The Peninsula London will open at a spectacular location in the heart of Belgravia. That hotel will feature 189 exquisitely styled guest rooms and suites conceived by Peter Marino, a prominent architect best known for creating the world's leading luxury fashion stores. His designs will reflect the distinctive heritage and grandeur of Belgravia. The Peninsula Istanbul, overlooking the Bosphorus, will also be completed next year.

The Peninsula Hong Kong remains the heart and soul of the group though and it's one of the world's great hotels. But if you stay here don't plan too much activity outside the hotel because you really want to just soak it up, particularly since it includes some of the finest dining options in Hong Kong, such as the legendary Gaddi's, renowned for its French cuisine and opulent interior. We love Spring Moon (Cantonese) too with its tea counter attended by tea masters offering 25 Chinese teas for your tasting pleasure.

Whether staying at The Pen, or just visiting, you must also eat at Felix, on the 28th floor and famous for its vertiginous loo with a view, designed, like the rest of the restaurant, by avant-garde designer Philippe Starck.

We were treated to the Felix Experience Menu featuring some of renowned chef Juan Gomez's seafood treats.

The Peninsula's buffet breakfast at The Verandah on the first floor is a great way to start the day and of course one must have High Tea, that's de rigueur.

You really want to soak it up staying at The Pen. Sitting in the lobby at any time of night or day, taking in the gilt rococo splendour and people watching, is one way to do that.

We always spend a bit of time at the gorgeous pool too, styled on Roman baths, with a sun deck overlooking the harbour.

The hotel has been regularly updated, including the major addition of a tower. Michael Kadoorie, chairman of Hong Kong and Shanghai Hotels, the company behind the hotel group, came up with the idea for a tower, a daring one considering it's a much-loved heritage property. That tower, rising out of and above the original building, opened in 1994 adding 132 guest rooms plus a heliport. The tower enhanced the hotel without robbing it of its colonial splendour and meant much better views.

In real estate, position is everything and The Peninsula's position is perfect. It's a short stroll to the historic Star Ferry and you step out of the hotel and into bustling Tsim Sha Tsui. It's not far to shopping heaven at Harbour City and close to the burgeoning West Kowloon Cultural District and the new Xiqu Centre, a worldclass arts venue. The Peninsula Hong Kong has cultural and other programs for guests and arranged for us to take in some traditional Cantonese Opera during our stay. The Tea House Experience includes opera excerpts with traditional music and singing and some tasty dim sum treats and Chinese tea at interval. What a delight!

Then it was back to the hotel for a swim and dinner at Felix. Dressed and ready, we had ten minutes to spare. So we just sat and stared out the window watching the lights come on across the harbour. Bliss. 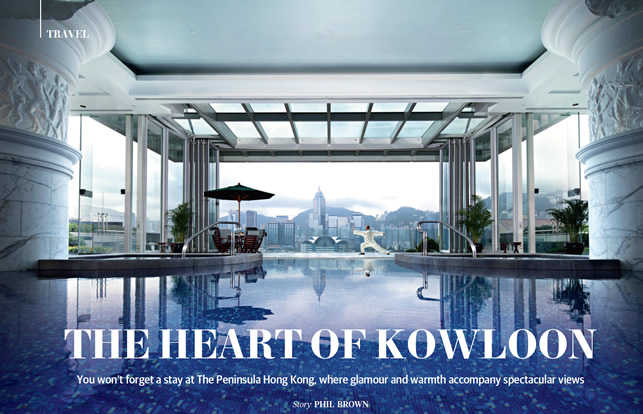 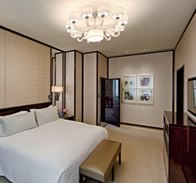 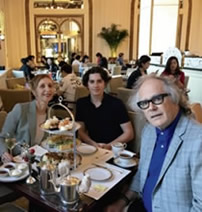