An oasis of dreams

Some years ago I recall gazing longingly across the Chao Praya River at The Peninsula Bangkok hotel. We were taking tea at the Mandarin Oriental at the time, a hotel steeped in literary history. Somerset Maugham stayed there. So did Joseph Conrad and James A Michener.

The Peninsula Bangkok wasn't around in their day (it opened in 1998) but I'm sure if it had been the famous writers would have liked it too.

The mother ship is The Peninsula Hong Kong, one of the Far East's most gracious and famous hotels. In recent decades this hotel group has spread out across the world and like all the other properties, The Peninsula Bangkok is an oasis of style and comfort.

Sitting by the river having breakfast at The Peninsula's River Cafe & Terrace, with the view partly obscured by my Bangkok Post, I felt glad we were finally there. The riverside location is lovely and a handy little shuttle ferry service runs from 6am to midnight. Bangkok is like Brisbane in one way - a river runs through it, the Chao Praya.

On day one in Bangkok we journeyed along that river as part of the hotel's Footprints From The Past tour, a guided exploration of historic neighbourhoods.

The Portuguese and Chinese came here centuries ago and vestiges of their cultures are still evident including the historic Santa Cruz church, which was built in 1770. After visiting it, we toured laneways, visited an amazing Buddhist temple nearby, and also wandered through a Muslim quarter in this surprisingly culturally diverse pocket of Thailand's capital.

The tour is part of the The Peninsula Academy's bespoke program that includes The Joy of Thai Cooking, Thai Martial Art,s Thai Painting Class, among others. There's even a Junior Chef experience because The Peninsula Bangkok is a warm, family friendly hotel.

Another lovely thing to do is to get up early to greet local monks who come for alms (rice and other food) each morning, a Buddhist tradition. I did this with my wife and son and it's a fitting introduction to Thai culture. The Peninsula Bangkok has 370 river view rooms including 60 one-bedroom and five themed suites.

The service starts upon arrival when you can opt for the signature experience of being picked up from the airport in a Rolls-Royce, which is a Peninsula tradition.

Exemplary service is at a premium in this five-star property (nobody does it better) and it's the little touches that impress, such as finding a screen-cleaning cloth left by our iPad.

Nice. As much fun as it is to explore Bangkok, when you're staying at a hotel like this (which is close to major roads and the Skytrain just across the river) you want to spend a bit of time lounging.

Or you can spend some time getting pampered in The Peninsula Spa. Lazing by this pool for an hour or two each day is de rigueur. The signature Thiptara Thai restaurant is superb and in the balmy evening, sitting supping by the river is a delight. The only drawback is checking out because you will not want to leave. But we will be back. This I swear. 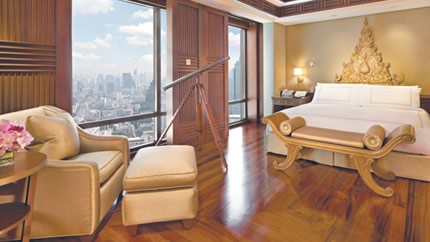