Safe harbour at Pier One

A hotel that has you feeling like you're on a boat is an attractive proposition. Particularly for someone, like me, who suffers from seasickness and doesn't want to venture out onto the ocean.

At Pier One Sydney Harbour, you get all the romance without the motion sickness. It's hard to imagine a more attractive position and if you love the maritime precinct around The Rocks, this hotel is perfect. And the view from my suite was, well, jaw-dropping. Out the window the harbour sparkles and the Sydney Harbour Bridge towers above.

Across the water is Luna Park and sailing boats and ferries glide by. This 189-room heritage hotel is boutique size and protrudes over the water on a dedicated wharf overlooking the wider harbour and Walsh Bay. It was built in 1912 initially as a working cargo wharf and later as a passenger transit point. In fact, it was a P&O passenger terminal until 1963. The Pier One Sydney Harbour Hotel was established here in 1991. Now it is part of Marriott's Signature Autograph Collection.

Some rooms have private decks over the water and each offers a unique vantage point to take in the beautiful views. Elements of the pier's industrial roots include exposed wooden beams and original steel framing that have been creatively retained by architects Bates Smart in the look and feel of the place.

The Admiral Suite is the crowning glory with panoramic views of the harbour and its icons - Luna Park, Sydney Harbour Bridge and the Sydney Opera House.

Waking in the morning to these harbour views feels a little like waking in a stateroom on a luxury cruise liner, although this hotel is more intimate than any liner. And there are some special touches. As a dog lover I was heartened to see pooches in the building because Pier One Sydney Harbour offerers petfriendly rooms.

Ground-floor accommodation includes a pet bed, water and food bowl as well as a minibar with extra treats, snacks and there are also pamper packs for your furry friend. Nice. And any hotel worth its salt (pardon the pun) should have a good lobby, and this one's is a buzzing but relaxing sanctuary with views across the water.

The Kerrigan, Pier One's food shack, is outside on the deck and it provides mouth-watering barbecue delights including slow-cooked lamb, pork ribs or smoked brisket served in soft tortillas, among other treats. I chose the burger, however, because, well, I always do.

The hotel's signature restaurant is The Gantry, where executive chef Joel Bickford is in charge. I invited a friend in to dine with me here and we did try one of the standout starters - potatoes- cauliflower-comte. There's a pre-show menu in case you're off to an event.

The hotel has a 24-hour check-in facility and concierge. The staff in general are urbanely international and everyone is very friendly, which helps.

The location is brilliant and nothing is very far from this spot, a place that accentuates that this is a harbour city with a rich history. It's perfect for walking by the harbour or tasting history around The Rocks, possibly with your pup padding along beside you. Now that would be special. 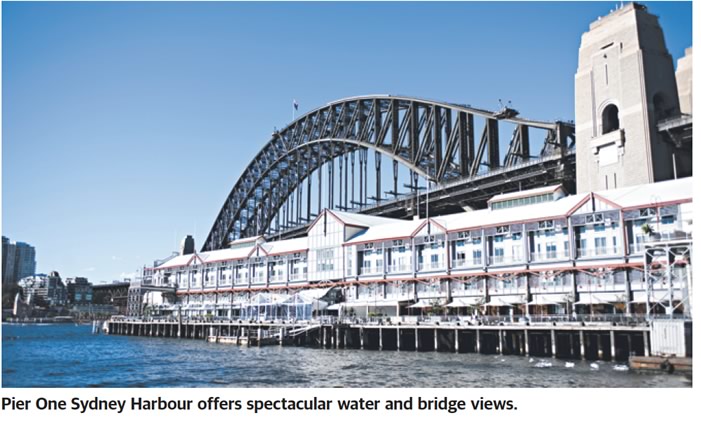 The writer was a guest of Pier One Sydney Harbour