Father and son bond over the drama of Brisbane’s seasonal sideshow. 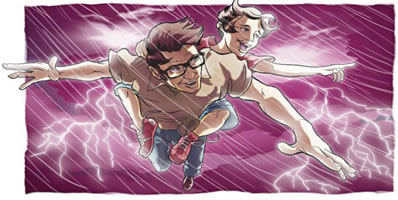 At storm central in my study at home in Brisbane’s inner north there’s excitement and trepidation as another summer tempest approaches. My son and second-in-command, amateur meteorologist Hamish Brown, aged eight, is monitoring the Bureau of Meteorology website with me. It’s a geeky bonding experience for boys and men, like train-spotting, fishing or watching cricket. Sitting side by side we track colourful, amoeba-like shapes of satellite imagery across the computer screen, an indication we are in for a hammering.

After a hiatus of a couple of decades southeast Queensland’s terrible beauties are being reborn. Rarely are we battered by cyclones that monster the tropics but we do a nice line in subtropical thunderstorms. On this afternoon a new storm cell has formed and is tracking northeast.“Oh no, it’s going to be a direct hit,”
Hamish says with some authority.“I’ll just check the loops.”

(For the uninitiated, this shows the storm’s movement.)

“Let’s go outside and see what we can see,” I suggest. It’s important to back up online research with some prac work.

Outside, looking south, beyond the railway line at the end of our street, behind the city’s towers of steel and glass, clouds billow like dark liquid spilt across the sky. Westward, a vanguard of cumulonimbus obscuresthe sun, veins of incandescent lightning streaking the thunderhead.

It’s a magnificent display of nature’s awesome power. As another jagged fork of electricity slashes the sky, Hamish prostrates himself on the front lawn.“If you lie flat on the ground the lightning can’t get you,” he says. I begin ranting, like King Lear out on the heath: “Get up, get up for Christ’s sake! We need to go inside.” But for a moment we are frozen, together, mouths agape, watching the sky erupt.

A storm like this is bittersweet; welcome because it takes the edge off a steaming day, but also dreaded because of the havoc it wreaks. We have been lucky so far but suburbs just beyond ours have been ravaged, homes destroyed, roofs torn off. But after the oppressive heat of the mid‑afternoon doldrums, this particular storm will, we hope, provide a refreshing respite.

These colourful Rorschach blots on the bureau’s satellite imagery usually form beyond the Darling Downs. If the clouds have a greenish tinge hail is likely, but mostly they unload the hard stuff before hitting the leafy environs of the city’s weatherboard jungle. On this afternoon the looming monster is without its threatening verdant hue and is basic black. Lightning finds landfall nearby and we retreat to the safety of the house. The heavensopen and drenching rain pounds the tin roof while thunder rumbles. We take our seats back in my study to watch the colourful, shape-shifting beast throb across the screen.

The drama is intense but short‑lived and after 20 minutes of lashing wind and pelting rain the storm subsides, the world is wet and refreshed. Outside the study window the frangipani in next door’s yard drips and exudes exquisite perfume.

My love of extreme weather can be traced to a childhood lived in Hong Kong. When typhoons blustered in from the South China Sea, school closed until the danger had passed– always a blessing. As a teenager living on the Gold Coast I took up surfing and fishing, pursuits that hone weather-watching skills.

Nowadays I am addicted to the Bureau of Meteorology website and The Weather Channel and the sins of the father appear to have been passed on. The storm season may be coming to an end but Wee Hamish remains attuned to barometric pressure. The other night, just on bedtime, he threw back the sheets and sniffed the air.

Can I just check the Bureau of Meteorology website one more time before I go to sleep?”

I smiled, fighting back the urge to say: “That’s my boy.”