Position is paramount when you're staying in any world capital you are unfamiliar with.

As a novice in Paris I wanted to be comfortable and at the centre of things and The Peninsula Paris turned out to be the perfect location. They say it's "just steps way from the Arc de Triomphe" and during our five nights in the French capital I couldn't get over how close we were.

This gracious hotel is on Avenue Kleber which runs up to that crazy roundabout that swirls around the Arc de Triomphe. I never tired of seeing that amazing monument so close.

That other amazing monument is within walking distance too and you get views of the Eiffel Tower from L'Oiseau Blanc, the hotel's rooftop restaurant which has a nice bar and terrace, although we were visiting in early December so the terrace was a bit chilly.

The Peninsula Paris is nothing short of spectacular and one of a growing number of Peninsula properties worldwide. The mother ship is The Peninsula Hong Kong which sets the standard and that standard is all about luxury (warm, stylish luxury, not stuffy luxury) and service. Service is the heart and soul of The Peninsula experience and it is in Paris in the same way it is in Hong Kong. Nothing is too much trouble, everyone is friendly and the hotel feels like a rather grand home away from home.

It is in the 16th arrondissement, close to famous monuments, museums and luxury shopping districts.

It's a very short stroll to the famous Avenue des Champs Elysees which is bustling and fun for shopping, strolling and people-watching.

On our first evening in Paris we dined in-house at LiLi, a restaurant that pays tribute to the hotel's Asian heritage. The design theme is quietly sumptuous and opera-inspired - Chinese and Western - and the Cantonese fare is out of this world.

The property itself is a late 19th century classic French-style building which opened in 1908 towards the end of La Belle Epoque as one of Paris' most famous grand hotels, the Hotel Majestic. If you're after historical cachet, try this: It was while staying here that George Gershwin composed An American in Paris in 1928. Cool.

It has had several incarnations and was restored lovingly and with no expense spared before being unveiled as The Peninsula Paris in 2014.

France's best artisans and stonemasons worked on it and frankly, it feels a little like staying in a palace. Le Lobby, just off the Avenue Kleber entrance, is where you will breakfast and take The Peninsula's celebrated afternoon tea.

The rooms feel like luxurious, comfortable Parisian apartments and frankly, there were times when we didn't want to leave ours. But the city of light is right outside and you're in the thick of it staying in the manner to which you could easily become accustomed.

You're on holiday in the most romantic city in the world so why not treat yourself?

The Peninsula Paris is at 19 Avenue Kleber, 75116, Paris.
Rates from $1200 per night for a Superior room. peninsula.com/paris
Singapore Airlines has 28 flights a week from Brisbane to Singapore and 10 flights a week from Singapore to Paris.
Brisbane-Paris all inclusive return tickets from $1595. singaporeair.com au. france.fr 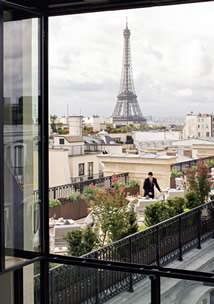