Discovering the spirit of the Outback

On waking, I looked out the window of my sleeper cabin to see flat bushland as we headed west, towards Longreach.

I was aboard Queensland Rail's iconic Spirit of the Outback train, travelling from Brisbane - a journey I have always wanted to make. I'm a bit of a train nerd; a Michael Portillo wannabe, if you like, sans the colourful attire.

I was, at least, wearing a Panama hat, although an Akubra might have been more suitable. From Brisbane's Roma Street Station it takes 25 hours and 15 minutes (but who's counting) to travel the 1,325km to Longreach by rail, and taking your time enables you to make a rather civilised transition to the Outback.

A first-class sleeper is a comfy way to go and meals are included. The food in the Tuckerbox dining carriage is good, solid fare. For dinner I had roast pork, followed by bread and butter pudding - just the sort of comfort food I like.

You miss some of the countryside as you sleep but the important part of the journey for me was in daylight. Early in my career I worked at The Morning Bulletin at Rockhampton, but only got as far west as Alpha in those days, where I attended the Alpha Show Ball.

So I was excited to be going further; to be traversing the wide, open spaces with curious kangaroos watching us rattle by and emus occasionally running alongside. This is exciting stuff for a city slicker like me.

On board I suggest you borrow a tablet device and listen to the rather fascinating commentary, which fills you in on the history of the places you are passing.

It's flat mostly west of Rocky but then you snake through the Drummond Range, which marks the real transition to the Outback. Afterwards the country flattens until eventually you enter the land of the Mitchell grass.

The Spirit of the Outback is hauled by diesel locomotives and operates up to four first-class sleeper carriages and two economy seated carriages.

The train has the Shearer's Rest Lounge Car (I spent a lot of time in there jotting in my notebook and drinking coffee), as well as the Tuckerbox dining car.

Heritage themes rule and there is an old world atmosphere which I like, with country hospitality from the attentive staff.

There are brief stops along the way, including a 20-minute pause in Barcaldine, which is long enough to hop off and get your obligatory photo of the famous Tree of Knowledge, which is just outside the train station.

We arrived in Longreach mid-afternoon on a clear blue autumn afternoon to find the town busy with travellers from all over, who seemed to be taking the opportunity to discover their own country at a time when overseas travel is out.

Good idea and what better place to explore than Queensland's own Outback Iningai, Malintji and Kuunkari peoples.

I stayed at newish accommodation, the Mitchell Grass Retreat, a glamping experience on an expanse of Mitchell grass on the edge of town.

Of course, Longreach has some major attractions and the two biggest are the Qantas Founders Museum and the Australian Stockman's Hall of Fame, and you really have to see both.

At the museum don't miss Luminescent Longreach, a 20-minute spectacular lightand- sound experience at night. Stand among iconic aircraft as world-class projection mapping and 360-degree immersive sound brings the 100-year story of Qantas to life, with the mighty Boeing 747 serving as a primary canvas.

If you?re an aviation or history buff this place is heaven. There are some amazing vintage planes, including a stunning old Catalina, and you must check out the new attraction: a recreation of a first-class Qantas lounge, the type you would have found on a 747 back in the 1970s. Retro chic, indeed.

Just across the road is the Australian Stockman's Hall of Fame, which perfectly captures the history and romance of the outback. The audio commentary is fascinating and I found the whole experience quite moving. I was gratified to hear stories about the Indigenous stockmen and women who played such an important role in opening up the Outback.

It's a little-known fact that I am rather interested in shearing history and lore, which is covered in detail.

And that's why I was excited to visit Camden Park Station, with Outback Dan (Dan Walker) himself as my tour guide.

This is a working cattle and sheep station - the sheep are now for eating rather than shearing - which is also a tourist attraction, with highlights including the oldest private ballroom in the Outback, a swagman's grave and walking in the footsteps of the Queen and the late Prince Philip, who visited here twice.

Outback Dan's grandfather, Sir James Walker, was a legendary figure around these parts and one of the founders of the Australian Stockman's Hall of Fame.

There are private and group tours available here. I was particularly excited to have morning tea with Dan and his mum, Lyn, in the old shearing shed, which is no longer in use but is still fully intact. I was chuffed to tread the same boards as the shearers of the not-too-distant past.

Dan also took me to visit the nearby town of Ilfracombe and the famous Wellshot Hotel, which dates back to 1890 on the present site. It's actually older and was in two other locations before being shifted here. Now the only thing I knew about Ilfracombe was that Dame Quentin Bryce is from there, and I noticed that she and daughter Chloe Shorten are represented on a wall of fame featuring the hats of folks that have passed through. I did not, however, nail my Panama to the wall to join the fun.

On my whistlestop visit I also enjoyed Smithy's Arvo Cruise, one of the offerings from local outfit Smithy's Outback Tours. Watching a magical sunset on the Thomson River was quite something, and it was fascinating to see the scar trees along the banks where the local Indigenous people once sourced wood for their canoes. The cruise was followed by Smithy's Outback Dinner & Show, capped off by tea and damper. Now that's fair dinkum.

Before catching my Qantas flight home I stopped at Casey's cafe. They told me the coffee there was good, and they were right. Sitting outside I listened to the twang of country music and took in the sights of the main drag, Eagle Street, when - blow me down - a horse-drawn stage coach went past.

"Only in Longreach," I said to the lady next to me, and she nodded and smiled. 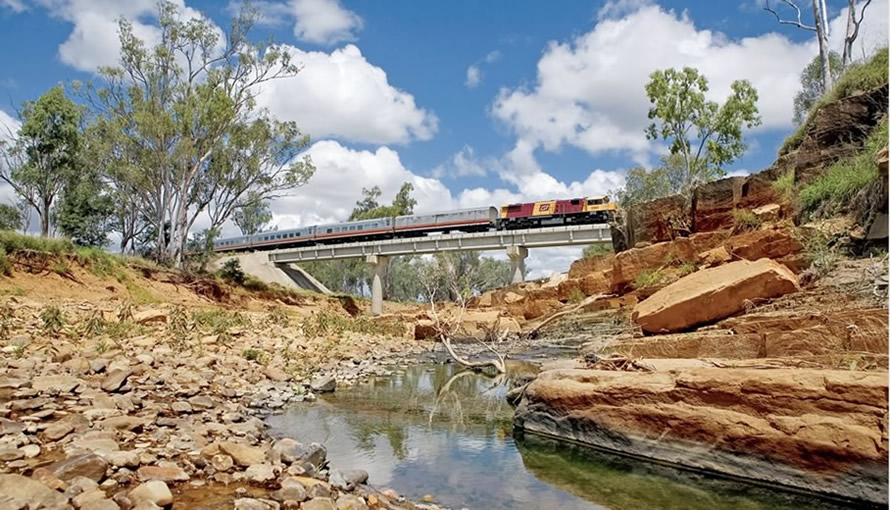 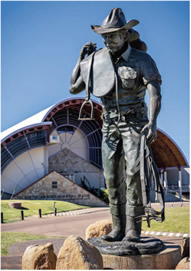