A room with a view

Being right at the heart of the city on Circular Quay is perfect for a cultural foray into Sydney.

With operas and a Sydney Symphony Orchestra concert to attend at the Sydney Opera House on a recent trip down south, we wanted to be staying close - and it doesn't get much closer than the Pullman Quay Grand Sydney Harbour.

What a treat to sit having breakfast watching the ferries (and a cruise liner during our stay) coming and going from a table at Q Dining, the hotel's newly refurbished restaurant which takes inspiration from the Circular Quay waterfront location and the Royal Botanic Garden Sydney just across historic Macquarie St.

Q Dining is described as "an Australian sanctuary" and encapsulates characteristic colours like foliage greens and earthy oranges, with an injection of pink clay and brass elements to elevate the brand. Working closely with local suppliers to source fresh and unique artisan ingredients, executive chef Steven Hartert has created an impressive menu, but book early because it gets very busy.

This hotel's location is just so exciting. I love Circular Quay, a place that has inspired poets and artists.

Tom Roberts painted it and Margaret Preston celebrated it as did Max Dupain, who captured it in classic photos.

I heard Aussie Crawl"s Reckless played on the radio the other day and I had forgotten that it actually opens on Circular Quay. "Meet me down by the jetty landing / Where the pontoons bump and spray / The others reading, standing / As the Manly Ferry cuts its way to Circular Quay." Sing along if you feel like it. I did.

I know Clive James loved it there too and once, having a coffee at a quay-front cafe, I looked up to notice James scribbling away in his notebook. There's a plaque in his honour on the quay deck nearby and other commemorations of the history of this place.

The proximity to Circular Quay is what it's all about for me.

But it's also close to the Art Gallery of NSW, the Australian Museum, Museum of Sydney, the Museum of Contemporary Art on the opposite side of the quay, the city itself just a stroll away and of course the Sydney Opera House and the stunning Royal Botanic Garden Sydney.

Our two-bedroom suite looked over the gardens which are quite beautiful and worth spending some time in. I recommend a tour.

In the middle is celebrity chef Luke Nguyen's charming restaurant Botanic House, just a five-minute walk away from the hotel.

We simply had to have lunch there and it was memorable. We also walked to Woolloomooloo, just a 20-minute hike, to eat at China Doll, also recommended.

I could get used to living in this neighbourhood and the beauty of this hotel is that for a few days at least you feel like you are doing that.

By the end of the week we had pretty well settled in.

The hotel has recently done some renovations on its one and two bedroom luxury apartment style hotel suites. Lovely to know that they engaged Brisbane interior design studio, Mel Porter Design (based at Banyo) for the job.

"The refurbishment delivers a modern interpretation of classic styling to create a timeless and luxurious space with refined outcomes," Porter says.

"Curated artwork selections, custom furniture pieces and statement lighting elements are selected in a bold monochromatic colour palette, designed to emulate the dappled and reflected light that is so prevalent of the hotel's harbourside location."

This bar has quite a buzz about it - as it should in this incredible location.

On land originally known as Warrane by the traditional Aboriginal owners, the Eora people, Circular Quay was built by convicts between 1837 and 1844 on the site of the first colonial settlement at Sydney Cove.

Sandstone blocks were used to construct an artificial shoreline on what were originally mudflats.

You can sense the history - a difficult history - while standing there watching the ferries come and go. I love that. 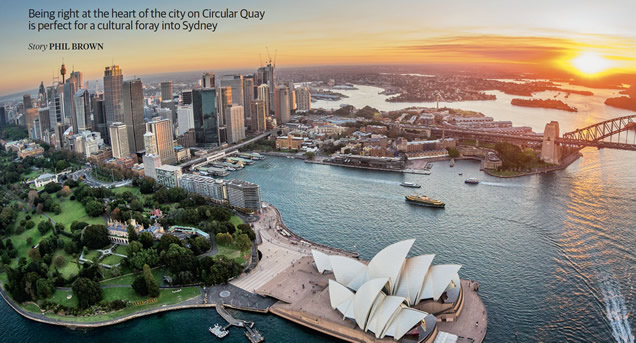