Hotel pairs the art of living with major artist’s show

A meeting with artist John Olsen in Brisbane last year was the inspiration for a trip to Melbourne to stay at his hotel. Well, OK, it's not really his hotel - it's one of the Art Series Hotel Group's properties. We stayed at The Blackman last year in Melbourne and now we have our own in Brisbane, The Johnson.

The Olsen in South Yarra, a 224-suite boutique hotel, may not actually be John's hotel but it damn well feels like it. It's dedicated to his art: on the walls, in murals on the shower walls (we had a cheeky emu in our room) and elsewhere. Olsen rules.

The Olsen party starts in the foyer where one wall features his stunning six-metre mural The Yellow Sun and The Yarra, a sunny, optimistic painting. The artist depicts the Yarra River as a natural vein that runs through the city. It's a stunning piece commissioned for The Olsen by the owners, the Deague family, a clan of art lovers who have created one of Australia's most exciting hotel chains.

There's a handy sheet that lists the works featured in its three flagship Melbourne hotels - The Olsen, The Cullen, and The Blackman. There are originals in the hotel but in the rooms the Olsens you see are prints, otherwise this would be an art museum not a hotel.

In our room we had Salt Lake, a 2003 work celebrating the beauty of Lake Eyre, one of his signature subjects. We also had a Queensland work, Cape York, from 2009. Queensland figured in Olsen's early career and was where he first fell in love with frogs, another of his favourite motifs. It was in a Queensland rainforest that he had his froggy epiphany and that strand of his work has been hugely popular. His animal paintings are in demand too and there are giraffes and insects in the hotel and a wonderful Olsen frog sculpture in the middle of the foyer.

There's actually never been a better time to visit The Olsen given the major Olsen show on in Melbourne right now. John Olsen: The You Beaut Country is on at The Ian Potter Centre: NGV Australia until February 12. This is a major retrospective of Olsen's works from the 1950s onwards, curated by David Hurlston of the NGV and Deborah Edwards of the Art Gallery of NSW. John Olsen, now 88, painted a wonderful welcome wall for the show.

The folks at the hotel tell me the artist was ensconced at The Olsen for a week around the time of the show opening, delighting guests who actually got to see and meet the man considered one of our greatest living painters.

When I met him at Philip Bacon Galleries in Brisbane last year for the first time it was a revelation. Yes, he was as ebullient and charming as he seemed in the programs and documentaries I had watched about him.

He's also a pioneer of Australian landscape painting. His Lake Eyre paintings are otherworldly aerials of that inland lake filling with water and coming to life.

Olsen's paintings have also celebrated his love of food, paella in particular, a legacy of his three years in Spain. And there just happens to be a John Olsen paella on the menu at The Olsen. I meant to try it but just didn't get around to it, dammit. Next time.

THE WRITER was a guest of The Olsen and Visit Victoria. John Olsen You Beaut @ The Olsen package, until Feb 12, includes complimentary cocktails, in-house art tour, and exhibition tickets, from $299 per night. artserieshotels.com.au. visitvictoria.com 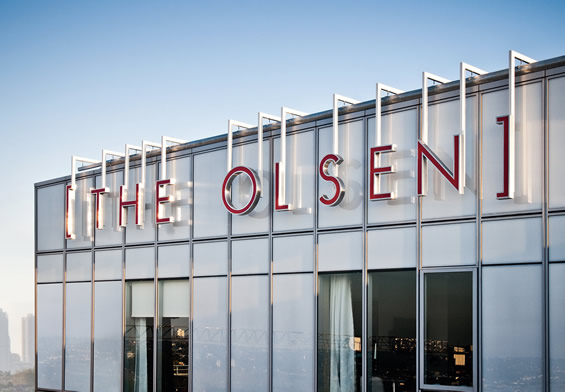 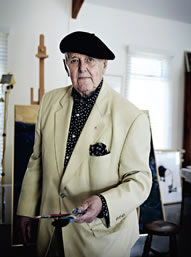 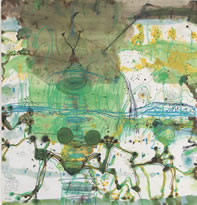