Experience the art of the Japanese tea ceremony, or shop ’til you drop. You can do both in one day from The Peninsula Tokyo.

I had my heart set on seeing some kabuki in Tokyo. But let me give you a tip, book early if you want to do that. Staying at The Peninsula Tokyo, at the entrance of the Marunouchi and Ginza districts, we were just a few hundred metres from Kabukiza, Japan's top kabuki theatre. They were just about to start a new show featuring several of the country's top stars, which is obviously why it was booked out. A month ahead.

What to do instead? Go to UNIQLO. But you can do that here in Brisbane, right? Maybe ... but UNIQLO Ginza on Chuo Dori is the mothership, the largest of its stores worldwide - as a disembodied voice constantly reminds you as you browse. It's 12 floors of retail therapy.

Culture is fine, but sometimes you just want to shop, and being on holidays, you actually have the time.

The shopping in Ginza is terrific, and from The Peninsula you're in striking distance. There's UNIQLO, Muji, Gap, and every other store your heart desires. Pop into the major Japanese department store Mitsukoshi, too. Its basement food hall is mind-blowing.

And despite being busy, it all feels more sedate than elsewhere in Asia. Japanese crowds are so polite. I love that.

And I love staying somewhere where you can just walk places. If you need to catch the subway, Hibiya train station is downstairs, via the hotel's basement level. And Tokyo Station is just around the corner. The Peninsula Tokyo is a stunning building. Architect Kazukiyo Sato's vision was for a hotel resembling a Japanese lantern, and indeed it does. Often The Peninsula Hotel Group chooses heritage properties, but this one was purpose built just over 10 years ago, and it's a 24-storey modern design icon.

We loved having a view out over the Imperial Palace and its grounds. Take a walk in the Imperial Palace East Garden if you get a chance. It's a lovely escape from the hustle and bustle. Mind you, the hustle and bustle in Tokyo never feels as gruelling as it can elsewhere. Even in busy parts of the city, like Shinjuku, it never feels as crazy as, say, Bangkok or Hong Kong.

Make a point of visiting Asakusa to take in the splendour of Senso-ji, Tokyo's most sacred and spectacular temple. The traditional streets from the train station to the temple offer an enticing taste of the past. Not far from the hotel - a short taxi ride - is Hamarikyu Gardens, once part of an old Shogun's palace complex. There's a lovely tea house here where you can practise your green tea drinking, with a handy sheet explaining the etiquette.

This recent visit was our first family trip to Japan, and my first time in the country since the age of 12. So it's been a while. When I was a boy, we stayed at the Palace Hotel Tokyo, which is just along from The Peninsula. Both overlook the palace, and sitting in our room in the afternoon, sipping tea and gazing out at the vision splendid, was not hard to take.

Like most hotels in The Peninsula Group, the Tokyo property is a bit of a onestop shop, and as with others, the Lobby, with its high tea, is a feature.

And each Peninsula has a signature restaurant. In Tokyo it's Peter, named after the hotel group's chief operating officer, Peter Borer. Peter has breathtaking 180- degree views of the Japanese capital, and it's an artwork in itself. It was designed by US and Canadian architecture and design team Yabu Pushelberg, and the bar features a forest of cherry blossom trees made of glass.

The hotel's other dining options include The Peninsula Boutique and Cafe. If you have a sweet tooth like me, this is a great spot for tea or coffee and cake - a nice sugar hit on your next shopping excursion.

NOW AND ZEN … (clockwise from left) - Senso-ji temple’s Buddha; and pagoda; The Peninsula Tokyo; UNIQLO Ginza; Tokyo from above; and a Ginza street scene. 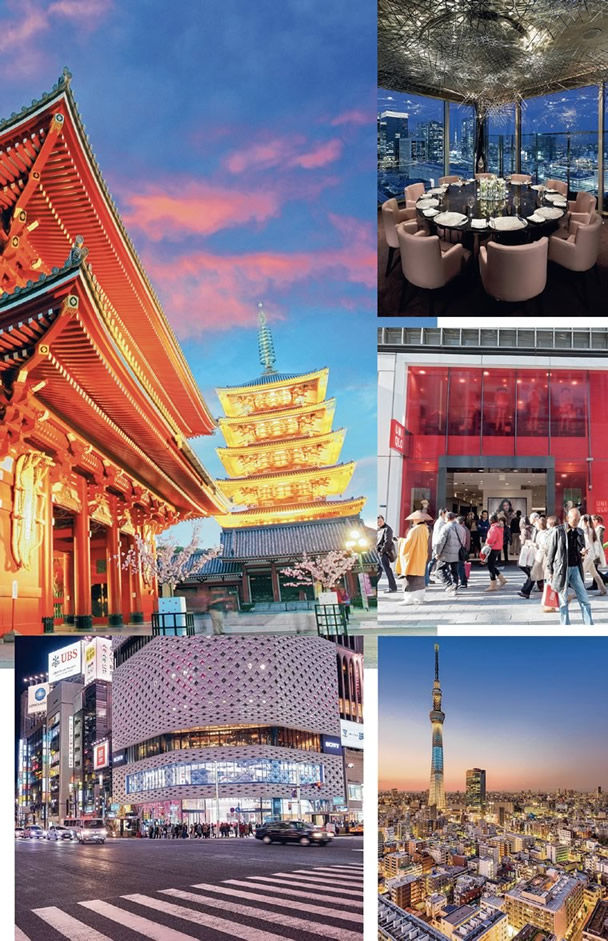