Being well behaved is not something Kathy Lette aspires to. Quite the opposite, as her new book demonstrates. Lette, an Australian who divides her time between Sydney and London, broke into our consciousness and popular culture as the co-author (with Gabrielle Carey) of Puberty Blues, which was as scandalous as it was popular when it was published in 1979. That book, a novel of steamy adolescent sex set amid Sydney beach culture, was turned into a major film and a TV miniseries. It established her as a unique comic writer and one who has never strayed far from the public eye ever since.

The "also by Kathy Lette" list of books included at the front of her new novel, HRT: Husband Replacement Therapy (which is out next week) is long and the titles are indicative of her subject matter - Foetal Attraction, Dead Sexy, How to Kill Your Husband (and other handy household hints), Men: A User's Guide, Courting Trouble and more recently After The Blues, the long-waited sequel to her debut novel.

Lette, 61 is vivacious, to say the least. And she's fun, but when she chats by phone from London she insists, between giggles, that she has a serious side.

Despite her comic turns she is a feminist who tackles serious subjects with comedy, very saucy comedy in the new novel.

She was supposed to be in Queensland spruiking it in the coming weeks and doing the rounds of libraries and book events in Brisbane ("I love Brisvegas," she says) and elsewhere. Instead she is holed up at home in West Hampstead with her adult children - daughter Georgina, 27, and Julius, 29, who has Asperger syndrome, a subject she has tackled with love and sensitivity in her work.

Her London neighbour is another funny Australian expat, one Barry Humphries. She explains that Humphries ??and wife Lizzie Spender live in the house behind. She and Dame Edna Everage's creator are good friends.

"When Barry came home recently he messaged me and said - 'Kathy, I am just at your back entrance', - Lette says, laughing. These two have a lot in common, obviously, including a certain appreciation of the ribald.

A few years ago there would have been four people holed up together in the West Hampstead house, including her now ex-husband, the celebrated human rights lawyer and host of the ABC TV show Hypotheticals, Geoffrey Robertson. The couple met, coincidentally, in Brisbane in 1988 when Robertson was hosting his show here. He was going out with Nigella Lawson (now a pal of Lette's) at the time and Lette was married to former Foxtel and News Corp boss Kim Williams.

Lette and Robertson married in 1990 and were a celebrity couple for decades until they divorced. Amicably. When they split after 27 years of marriage in 2017, Lette said, "Geoff and I have separated on the warmest of terms and remain close and committed to the family we have created together."

Fast-forward a few years and out comes a book titled Husband Replacement Therapy. Ouch. One wonders how Robertson feels about that?

"He laughed when I told him," Lette says. "We are still very good friends, We speak on the phone every day. It sounds like a cliche I know but we are getting on much better now that we don't live together anymore." She has a new man in her life, Brian O'Doherty, who gets a mention in the dedication to her new book.

It's nice that Robertson finds the idea of her new book amusing because husbands get a bit of a lashing in this sexy romp which is largely set on board a cruise ship. Possibly not the best time to be launching a book set on a cruise ship I suggest.

"I might as well have called the book Titanic," Lette says, although I point out it might be a good thing because people might not want to cruise now but they can do so virtually by reading her book. The cruise in the book happens when the protagonist, Ruby, finds out she has terminal cancer. Ruby uses her 50th birthday party speech to announce this and demolish all and sundry including her cheating husband. She then announces that she has booked a cruise for herself and her two sisters.

There's a twist involved, which I won't give away. Anyway, with life in disarray behind them they take off on the cruise which turns out to be a cougar cruise for older women looking for young men. What follows is like a Carry On movie crossed with Fifty Shades of Grey. It's saucy as hell. Even soft porn at times and it's very funny. But it also has a point and encourages readers to seize the day or 'carpe the hell out of the diem" as Lette puts it. One of the things she explores is how women are supposed to behave as they grow older.

Lette herself is growing old (or older) disgracefully in life and in print and she wants others to follow suit.

"Women are always told how to behave," she complains. "It's time we didn't. Behave, that is. Women are brought up to be demure human handbags. The lovely thing about menopause is that your oestrogen drops and your testosterone goes up and you get selfish and feisty, like blokes. There are no periods, no pregnancies, the kids have grown up, and it's very liberating."

The new novel celebrates that in a very comedic fashion but there is, as I said serious intent.

"I was on a book tour in Italy and my publisher accidentally introduced me as Cafe Latte instead of Kathy Lette," she says. "Which was really quite appropriate. Because I'm frothy on top but punch down to the bottom and you'll find a strong macchiato."

A rather appropriate metaphor for contemporary Australians to get their head around. I mean we are obsessed with coffee, aren't we?

While her new novel is not autobiographical, Lette confesses that she does know a thing or two about cruising. On ships, that is.

She has three sisters and they have been on cruises together as a family group. In fact they were all sailing in the Whitsundays when things went awry recently.

"I was on one of those adventure before dementia trips," Lette says. "We were pretty well out of radio contact for a week and when we got back to shore it was all lockdowns and border closures. I had to decide to either stay and help look after my 88-year-old mum in Sydney or get back to my family in London."

Having three sisters to help with her mum, she chose to join her children in London and has been holed up there ever since, in West Hampstead. She loves London and could be considered to be one of Britain's A-listers. She's friendly with the Royals, knows Prince Charles the rarefied air of London society. I mean, she was once the London Savoy Hotel's Writer in Residence and they even named a champagne cocktail after her - the Kathy Cassis. Among other career highlights she is proud of, Lette says she once taught Stephen Fry a word (she doesn't say which one), instructed Salman Rushdie in the limbo and she scripted Julian Assange's cameo in The Simpsons' 500th episode.

She mixes serious intent with frivolity. As for her new book, it's not really a self-help book - more like a help yourself book but she does offer plenty of advice about older women redefining their lives. We are even offered a Q&A with her in the book's publicity material. It is entitled What would Kathy (Ruby) do?

Here's an example of the questions she deals with:

Q: I think my husband is having an affair and I am deeply attracted to another man. Should I have an affair as well?

A: "Don't get sad, or mad, get bad," Lette advises. "After marriage, a cougar needs to be rehabilitated and released back into the wild."

As a man of a certain age I have no words. No, scratch that, I have two words and I deliver them, with apologies to Austin Powers, over the phone to Lette. "Oh behave!"

But as she has already made it quite clear she has no intention of doing that anytime soon. Or ever. 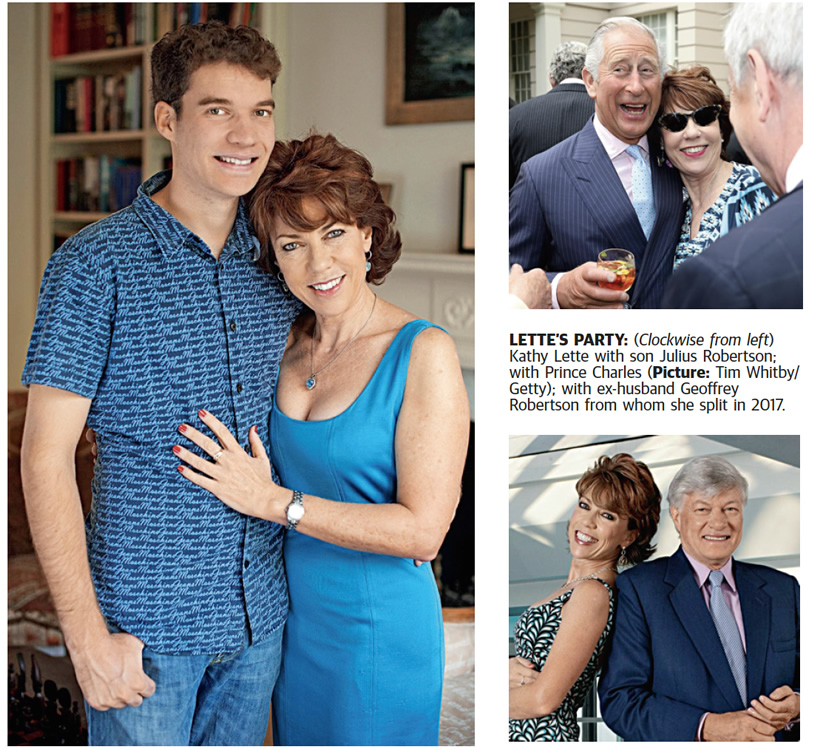